An Afternoon in the Desert

on November 27, 2010
Considering we were away from family and could only connect up with them by cell phone, we otherwise had a nice Thanksgiving break. The park's Thanksgiving Dinner turned out better than expected, as we had about 30 people, far more food than necessary,... and a singing ranger who entertained us for over an hour after the feast. Bright sun and enough warm clothes made us all forget about the cool breezy weather. 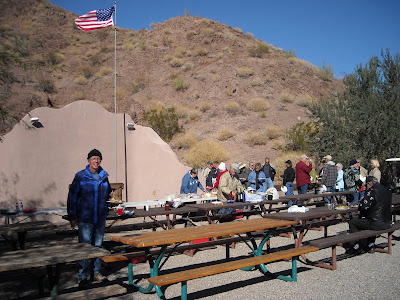 Our traditional Thanksgiving movie is "Planes, Trains, & Automobiles" (Steve Martin, John Candy, et.al.) and it was dusted off for it's annual viewing again this year Thursday night. It's a corny old film that still makes me laugh... with a little holiday-season heart to boot. Very enjoyable.

Friday, we fought the urge to rush out do battle with the hoards looking for the best deals (didn't take much for me to fight that urge!) and instead went for a drive in the desert. Much of this part of Arizona is public land managed by the Bureau of Land Management. While there are some rules about what you can do here and there, it's pretty much open to the public for anything you feel like doing... hiking, boondocking, 4-wheelin', rock-hounding, having a camp-fire, and whatever else you could come up with.

There are paths and roads and trails that snake all around these lands... and if you don't see a road, just start a new one. But most of these "roads" are really Jeep trails that require a high-clearance 4WD vehicle to engage them with any confidence. As you know, the low-clearance Hocus-Focus is definitely NOT any of those things... so we proceeded cautiously. We did manage to find a section of the Old Trails Highway -- a coast to coast roadway alignment designated by the Government in 1912 -- the precursor to Route 66. It was primitive then... and what remains hasn't changed much. Finding a nice flat spot on top a rise... with a 360 degree view of the surrounding lands... we parked and killed the afternoon looking for rocks and meteorites (on good authority, the area we were in was an impact area for a meteor that ran into Earth some years ago), hiked around, found a geo-cache, started a campfire, and just relaxed. With nary another soul around, it was one of the best afternoons we've spent in some time. Might have to trade in the Focus on a Jeep one of these days.

Returning to our campground about night-fall, the big surprise was we were just in time for the parade of golf carts from a neighboring RV Park just up the road a piece... all decorated in Christmas and holiday themes. There were more than 20 of them... and it was cool to see them parade around our State Park with all the campers hootin' and holerin'. Dar was in her glory. Here's a link to a video we took of the event so you can get a feel for what it was like.

At this point, Saturday afternoon, we're thinking we might extend here another day or two... letting the desert warm up a bit before we take our turn boondocking down around Quartzsite for a few days... our next stop. This morning we had 32f, and the next couple mornings could be colder yet. It's one thing when we're plugged into power... it can be another when you're relying on some old weakened batteries that don't have the poop they once did.  We'll make the decision tomorrow morning, Sunday, our current day of departure.