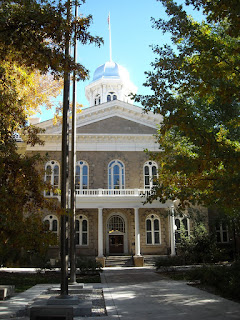 I'm still not sure what to think about the Nevada State Capitol. Built in 1870, it's a small structure that's called the "State Capitol", but few of the functions of State Government are still contained within it's walls. It's just too small to be viable in this complicated world we live in. We did see that the Governor maintains an office here along with a few others. But the Supreme Court moved out and to it's own building in 1937. The Legislature, both the Senate and the House, moved out and to it's own building in 1971 -- making Nevada one of only three states in which the legislature is separate from the Capitol. And many other government offices are sprinkled around the Capitol grounds in their own buildings. While it's not uncommon for governments to out-grow their Capitol and expand to other nearby buildings, Nevada has taken this vacating of the Capitol to a level we hadn't seen before.

On top of that, by 1957 the Capitol building had deteriorated to the point that the State Public Works Board declared the building hazardous and recommended demolition. But the legislature saved it and a massive rehabilitation took place in the early 1970's. The only part of the building, as it stands today, that's original, are the exterior stone walls, the wooden staircases and some other interior appointments. Everything else was gutted and rebuilt -- making a structurally sound building but a building that feels, to me anyway, a bit like a reproduction... a little like looking at a print of a famous painting instead of the original. But, in the big scheme of things, I do think it's better to have saved it as they did than to let it fall to the wrecking ball. 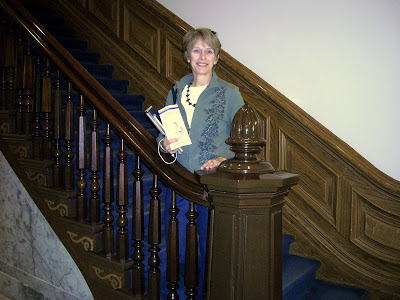 So, while it's still the official State Capitol, it seems more symbolic than functional. Regardless, we did visit, we did add Nevada to the list of State Capitols that we've seen... and we did learn a lot of Nevada history along the way.

Personal impressions of the place: it's well hidden behind hundreds of trees planted on the Capitol grounds over the years for symbolic and ceremonial reasons... maybe by some who didn't realize how many trees there actually were or just how big they were going to get... so much so that it's impossible to get a complete photograph of the building. Because it was built so early in the State's history, it's very small in comparison with other Capitols we've seen. While you could call it "nicely done", and "well cared for", there's little grandeur or magesty to the place. It's very spartan, down-to-business, and utilitarian, which I believe was the intention when it was built. I loved the creaking wooden staircases (which are original), and the glimpse into what I imagined other early frontier capitols may have felt like. 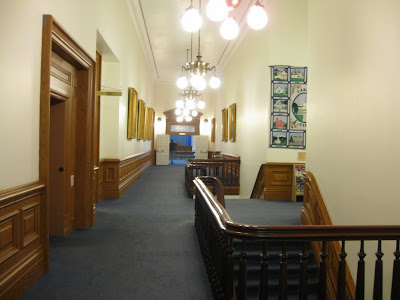 Even though I shouldn't expect things like this to fit a common form or meet some standard created by others, I'd have to rank this Capitol somewhere lower on our list of those we've visited. It was interesting, not stunning. But we do enjoy the range of diversity among those we've visited... the stories of their origins... and the reflection of the people who built these Monuments.

As always... more pics from our day can be seen in an online album.