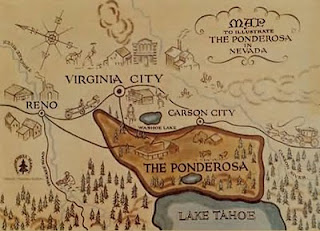 There it was -- Virginia City. Right there on the map, just a little way from Lake Tahoe and Carson City. As a kid in the 60's, I saw Virginia City on TV every week... it was the nearest town to the Ponderosa Ranch, and where Ben, Hoss, Adam, and Little Joe had to go for supplies and story-lines for the famous TV show Bonanza. And there it was!

Well, the mostly flat and fictional Virginia City of the TV show (actually a backlot set at Paramount), was a tad different than the real one. The real Virginia City was a  mining boom-town, it's entire reason for existing at all was that it was sitting on top of one of the richest silver strikes of all time... the mother of all lodes... the Comstock Lode. Perched on the side of Mt. Davidson, a peak in the Virginia Range here in Northwest Nevada, the town exploded with growth after the first silver strike in 1859, eventually growing to more than 10,000 residents by 1880. But by that time, after 20 years of intense mining activity, the slow decline had already begun and it was generally considered that the Comstock lode was almost played-out. By 1900, the town had shrunk to 2,500 as people wandered away looking for work and new opportunities elsewhere.

Our first glimpse of the town was during our early morning drive west toward Carson City and Lake Tahoe. Near the town of Stagecoach we could see the buildings of the old mining town clustered ahead of us on an elevated slope well above the surrounding landscape. Despite being many miles away, the morning sun reflected off random 140 year-old windows... making the whole town shine like a pile of polished silver. 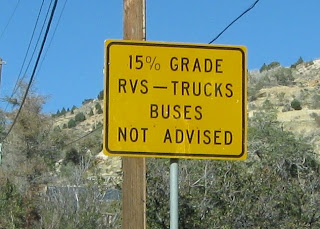 Later in the afternoon, after our Lake Tahoe and Nevada Capitol explorations, when we made the  steep (15% in spots) 7 mile climb up the mountain from US-50, we found a town that exists today primarily as a tourist destination. Only about 1,000 people claim Virginia City as their town, a good share of them probably working "down the hill" in Carson City. "C" street, the 6 or 8 block long main drag, is lined with old commercial buildings turned into tourist traps... bars, gift shops, candy stores, etc.

The very steep mountain-side on which Virginia City is built can make walking, or driving, a challenge. The longer main streets in town run along the side of the hill and, thus, are relatively level. But the shorter streets that run perpendicular to the main streets are at a significant steep angle. The roofs of buildings just one block down the hill are below the level of the next higher street. 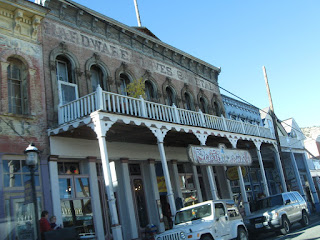 Scattered about, both in and outside of town, are large piles of mined material "dumps" -- the stuff that's left after the silver has been extracted. Evidence of mining activity is all around, but in most cases, these are abandoned operations from years ago. There is some limited mining of the lower grade ores left behind by the old mining methods as newer processes can successfully extract more silver and gold than was possible before.

With the rich ores of the Comstock lode gone, mining for tourist dollars is probably the only thing keeping Virginia City from becoming a ghost town.