Picking Up the Pace

December 13, 2010
We're moving again tomorrow... Tuesday, and heading for the Tucson area where we're planning to have dinner one night with some members of our Tucson family. We'll only be in the area two days, so it'll be a quick visit to say the least.

We've decided to spend three months in Rockport Texas starting in early January. Dar is going to work at a local hospital during that time... both to keep her nursing skills current and to make a few bucks to offset the ever increasing price of her health insurance (up 25% for next year). And yes, it's the same hospital she worked at for a few weeks last winter. It'll be tough for intrepid explorers to plant themselves in one place for that long... but compromise is a big part of this lifestyle. We'll do fine.

For the next couple weeks we'll be moving every other day or so. We've been lingering in the desert a little longer than planned... not only due to a growing love for this part of the country, but also the better-than-normal weather (which normally is pretty darned good!) in recent weeks. We will be back to this little corner of the world next year... it's become a favorite. 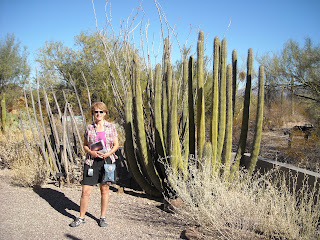 Today we drove down and explored Organ Pipe Cactus National Monument, which was created by FDR in 1937 for the purpose of preserving this unique corner of the Sonoran Desert. Among the rich and varied plant life here is the Organ Pipe Cactus... a large columnar cactus that's common south of here in Mexico but rather rare here in the States. We drove the 21 mile long Ajo Mountain Trail... one of two driving tours that get the explorer out into the middle of the Monument's 516 square miles. It was a more primitive road than we probably should have been on with the Hochus Focus toad, but we made it and were rewarded with some stunning views along the way. 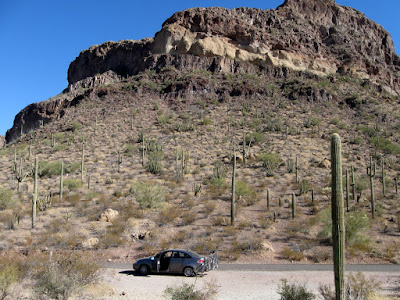 And tonight we burned up the last of the firewood we've been dragging along since Q., watched the sun set, and enjoyed the sky-show which was better than normal tonight. We watched military fighter jets, at least 6 of them, flying around and through the sky over our desert camp tonight. I'm only guessing it was some kind of night training??? But as we watched them dog-fight, maneuver, loop around, and chase each other, some of them actually dropped a series of flares -- which I'm guessing were defensive counter-measures against heat seeking air-to-air missiles. It was a show we'd never seen before... and you won't ever see in more populated areas.