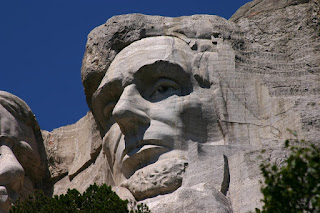 Saturday we loaded up the exploration-rig (the toad) and headed into them thar' hills. The Black Hills, that is.

South Dakota's Black Hills are the eroded remnants of a mountainous dome forced upward by volcanic forces many millions of years ago. Despite their eroded nature, they rise 4,000 feet above the surrounding high northern grasslands... like an island in the plains. Harney Peak, at 7,242 feet, is the highest point east of the Rockies and west of the Spanish Pyrenees. The area is about 50 miles by 80 miles and was home to Native Americans for the past 10,000 years.

Heavily forested with Ponderosa Pine, a strong scent of pine is always present when meandering the maze of roads that weave their way through the hills. Due to the ruggedness of the area, wildlife can flourish relatively undisturbed by civilization... although developers are doing their best to turn the place into a vast tourist trap. US16, the road leading from Rapid City to Keystone and the Mt. Rushmore area, is lined with all sorts of glittery touristy "fun" things... Bear Country USA, Reptile Gardens, the Fort Hays Chuckwagon Dinner and Show, Old McDonalds Petting Farm, a Presidential Wax Museum, and Holy Terror Mini Golf are just a few of the places tourists can drop cash and keep the kids happy. I mean... really... who wants to look at rocks and trees when I could be  playing mini golf in the dark with lighted balls? I think that's all I'll say about all that. 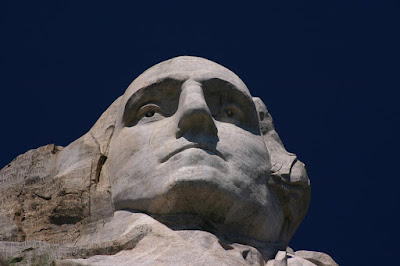 The first place we stopped was Mt. Rushmore. I think I wrote the other day that it's been 37 years since Dar and I were here. The facilities are now very new and modern, lining a central arched walkway from the parking garage ($11) to the main viewing plaza. It looks to be mostly constructed of native local granite and, considering the huge number of people it must service, is both functional and elegant. Since it's still summer, and this was a Saturday, the crowds were significant, but not too intrusive. 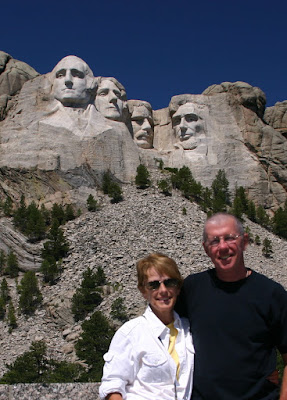 What can I write that will add to what's been said so many times before about the monument itself... the four Presidents carved into the granite mountain? It's a stunning work of art and also a monument to it's creator, Gutzon Borglum. It was a great day for photography and our two cameras got a real workout.

From Mt. Rushmore we drove down to the Crazy Horse Memorial, something new to us. While it did cost us $20 to get in ($10 each), neither of us had a problem with it considering that most of the expense of finishing this massive work is being paid for by admission fees and donations. 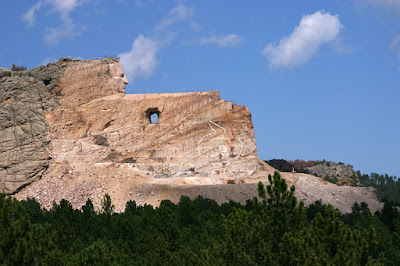 I was a little surprised at the scope of the visitors center and surrounding museum, theater, cultural center, the sculptors preserved home and studio, and the viewing veranda and restaurant. It's all much more than I was expecting. This is clearly a Native American project... driven by the Lakota Sioux. The complete ultimate site plan calls for the addition of a huge museum of the American Indian and the Indian University of North America and Medical Training Center. 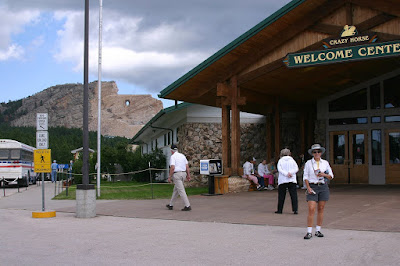 The carving itself, begun in 1948 by Korczak Ziolkowski, is immense. The largest carving in the world, it will be 563 feet high and 641 feet long. In comparison, the Mt. Rushmore Memorial, all of it, would fit on the side of Crazy Horse's head. Funded completely by private donations and admission fees, it's a project that will move slowly and could last well over a hundred years.

The story goes that old Korczak, already in his 40s when he started the work in 1948, worked alone for the first 5 years. Every day he had to climb something like 900 stairs to get from his base camp to the top where he was working... lugging air hammers, drills, and tool steel up with him. His first big air compressor (needed to run the equipment) was a tired old Buda compressor that was sitting down at the bottom... the compressed air piped to the top. It had to be hand cranked to get it started. Some days he'd start the old Buda, make sure it was running ok, and start climbing the stairs. About half way up, he'd hear the old Buda chug and kaput to a stop, and he'd have to climb all the way down, restart it, and then back up again to resume the climb to the top. On the worst day, he had to go down and back up again 9 times to tend to the old beast.

Korczak died in 1982 and since then his wife, Ruth, and 7 of their children continue the work. I find myself hoping, but wondering if it will ever actually be completed. I'll never know... nor will anyone alive today. And who will be looking at these massive stone faces a thousand or ten thousand years from now?  And what will they be thinking? Could they be among the most enduring evidence of our culture and civilization after the cockroaches take over? 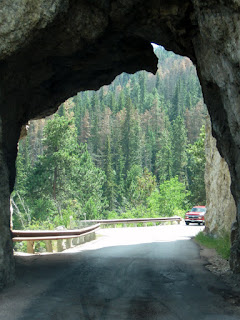 With a few hours of daylight left, we decided to drive another portion of the Peter Norbeck Scenic Byway. When I wrote earlier about the maze of roads that weave through the Black Hills... this is the epitome. All together, it's a 66 mile double loop of twisting roads, low narrow tunnels, and "pig-tail" bridges that traverse some of the most difficult terrain here. And what a great thing it is... to be able to get to places in the hills where, without the road, you'd have to hike and climb to. The two highlights of the afternoon were portions of the road known as the Needles Highway and the Iron Mountain Road.

The best way to appreciate the Scenic Byway is to go slow. Considering the places you'll stop to walk around and soak in the views, to smell the pine, you might only average 10 miles per hour... maybe less. For example, Needles Highway is only 14 miles long, but took us a little over an hour and a half to complete.

Tunnels. There are 6 tunnels along Needles Highway and Iron Mountain Road. Since the smallest, dimensionally, is only 10' 7" high and 8' 4" wide... it'll be a long time before we take the bus-house on these roads... like never! If you travel from south to north on Iron Mountain Road, the last tunnel perfectly frames Mt. Rushmore, directly in front of you, as you inch through the narrow gap. 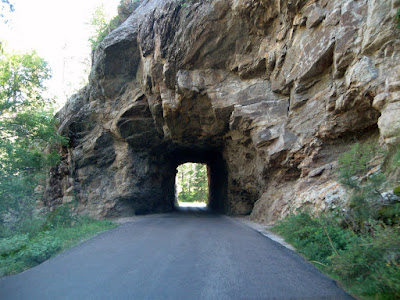 Pig-tail bridges. These are bridges that are curved so that they spiral down (or up... depending on your direction) in a tight circle and cross under themselves... a 270 degree or more curve, depending on the geography. We crossed a number of them on Iron Mountain Road.

Shadows were growing long as we finally made it back to Keystone, one of the centers of activity here in the hills. I'd best describe Keystone as the Gatlinburg of South Dakota... enough said.

During our stay in the area, we'll be back into the hills to see more next week. But I think we'll let the weekend crowd have it to themselves on Sunday.

Remember, clicking on any images in this blog will enlarge them. Dar also has many more photos from the day in our online photo collection.
By Thom Hoch at 8/21/2011 11:25:00 AM
Newer Post Older Post Home