The past couple days we've been hanging around the camper and trying to get caught up on journal posts, photos, and other miscellaneous paperwork/computer work. But today, about noon, cabin-fever was setting in and we had to get out and do something. 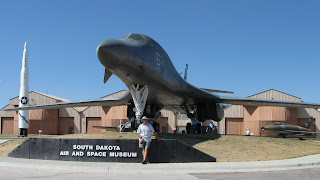 A good close option was the South Dakota Air and Space Museum, situated at the edge of Ellsworth Air Force Base... about 12 miles from our camp. Since the day was shaping up to be another warm one (we're getting used to it... heat and low humidity = warm days and cool nights), it'd probably be better to be out and about instead of sitting around the bus-house and sweating.

We both have a fondness for aviation. I've always liked airplanes, the thought of flight... the freedom of it... so much so that many years ago I took flying lessons and got my private pilots license. Dar, on the other hand, just has the hots for pilots... any pilots... anyone who flies. Hmmm. Hope my license is still current. 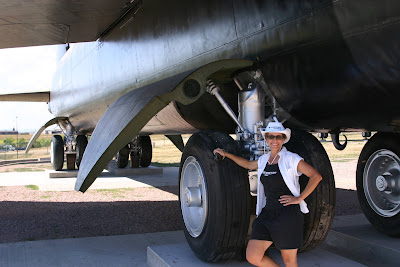 There's no admission to the museum... but a donation is appreciated. Most of their museum pieces are on static display outside... a lot of it the big iron: nice examples of the B-29, a B-52D, an EC-135, a B-1B (I wondered who or what buggered this billion dollar machine up so bad that it's now a museum hulk??), and a myriad of other planes from the post WWII era. 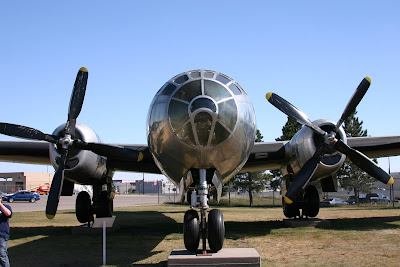 But the highlight of our afternoon was the tour of Ellsworth AFB offered by the museum for only $8 each. What tipped me over to taking the tour was that it included a tour of the training silo for the Minuteman II missile... the only other Minuteman II silo that still exists in addition to the Delta-09 silo we stopped and visited outside of Wall a few days ago.

The catch was that we both had to be screened by base security... and with Dar's checkered past it's likely they'd ask us, politely of course, to get off the bus. They're serious about security these days and aren't going to put up with a couple of troublemakers from Wisconsin if they can avoid it.

Surprisingly, we slipped right past security and onto the base. Our tour guide, named Harry, only had the two of us to deal with... and he could see we were basically harmless anyway. So he drove all over the base, showing us some very modern housing units, recreation and workout facilities, parks, golf course, the BX, the commissary, clubs and bars and gathering spots... why, you wouldn't have to leave the base for much of anything. About 6,000 people work on the base and I was "this close" to signing up. 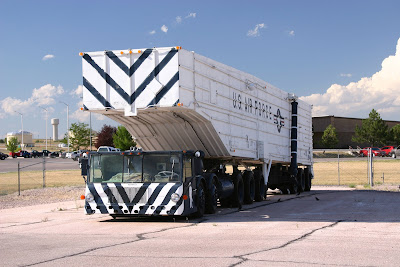 But then we pulled into the missile silo area. They've kept one transporter/erector truck and one armored security jeep-thing they called the "peacekeeper" for museum purposes. Back when the MM-II was active, groups of these kinds of vehicles would be running around the roads of western South Dakota, moving, loading, and unloading missiles and other equipment from the 150 silos under this base's command. 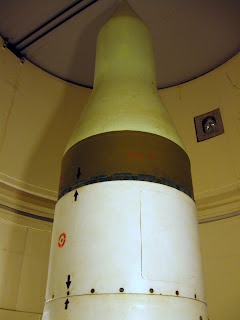 We were able to descend stairs into the silo... three flights of stair down... about 25 or 30 feet. At that level we walked into the silo and saw the training missile. The MM-II is 60 feet tall and the silo is 90 feet deep. Peering down alongside the missile, especially in such close quarters, it's a shocking long way to the bottom. 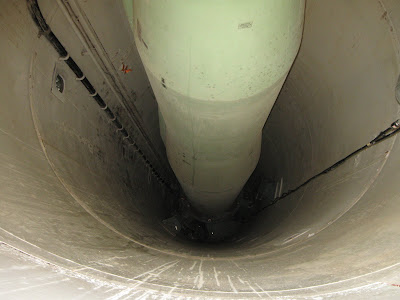 It was a good visit... especially after having seen the Delta-09 silo out near Wall. And we always love taking photos of classic aviation machinery.

Tonight, we're hitting the sack early so we can get an early start tomorrow. We hope to visit Wind Cave National Park... and then see what other trouble we can get into.