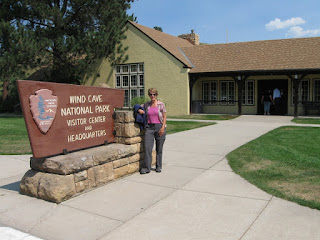 Got an early start this morning... for us. Out the door a little after 7am, stopped for breakfast at a nearby restaurant that's already become a favorite of ours, and were back on the road a little after 8am. The prime destination today was Wind Cave National Park. I've written before that visiting as many of the National Parks is one of our themes. Our stop at Wind Cave today will be our 21st of the 58 on the list.

The drive to Wind Cave is about 55 miles and takes us through the Black Hills towns of Hill City and Custer, both of which impressed us as very neat, affluent, and comfortable. After a few days of running all over this corner of the State we've found the roads in the Black Hills to be nothing less than excellent. The main north-south backbones, US-16 and US-385 on the west side and SD-79 on the east side, appear to be nearly brand new, wide, and smooth. And the various other roads that weave through the area are in good shape too. We really haven't found any that caused us to grimace.

Wind Cave is one of the oldest National Parks in the system... the 7th designated as such... way back in 1903. Named for a hole, a natural entrance, that blew air... it was known to early natives and considered sacred. But in 1881 a couple of cowboys named Bingham stumbled on the hole, heard the sound of blowing air, and when they tried to look down into the hole the rushing air blew their hat off.

For the next few years only a few people ventured a short distance into the hole to look around. But in 1890, a lad named Alvin McDonald, yet a teenager, developed an interest in the cave and started exploring it in earnest. He also gave tours, for a charge, and soon large numbers of people were traipsing through the cave... often chipping off cave decorations and taking them home. Eventually, some influential people became concerned enough to push for government assistance in protecting the cave for future generations. It all came together when Teddy Roosevelt signed the documents in 1903 making Wind Cave a National Park... the first designated to preserve a cave.

We took the "Natural Entrance" tour... an hour and a half tour down the slightly-modified original entrance and along narrow passageways and a few larger "rooms" where the guide could talk to our fairly large group. At the deepest point we were 200 feet beneath the surface. Wind Cave is noted for the cave decoration known as "boxwork", which are thin fins of calcite that formed in cracks in softer limestone... and left behind after the limestone dissolved away. Arrayed in patterns that resemble boxes, they're very rare and only occur in a handful of caves around the world.

After our tour and exploration of the exhibits and a film on the Park, we decided to drive northward and catch another portion of the Peter Norbeck Scenic Byway known as Wildlife Loop Road which winds through the southern portion of Custer State Park. Here's a sampling of what we saw... there's more photos in an online album from the day. 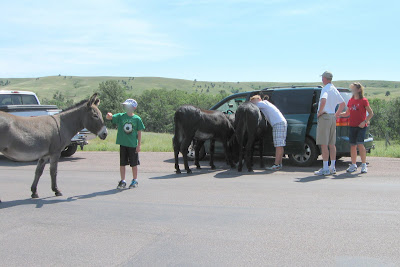 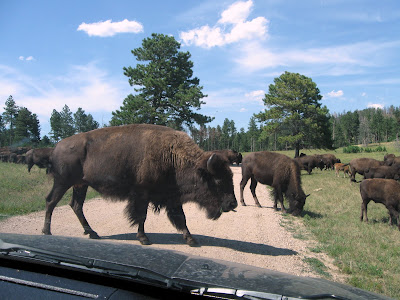 The feral burros are not native but the descendants of burros used as pack animals in the early days of the parks history. They hang around entrance gates and will stick their noses into any open car window looking for a morsel of food. They've become quite accomplished beggars, and owing to their cuteness, they're a tourist favorite... a big hit with the kids.

We got the inside tip on where a couple larger herds of bison were located... about 3 or 4 miles down Fisherman Flats Road, a gravel 1.5 lane road with very few straight or flat sections. We came over a rise... and there they were. They were slowly moving, purposefully, it seemed, in one direction and a couple of times they surrounded our car. The ranger estimated each heard in the 200 to 300 range.

During the drive we also found a bunch of pronghorn antelope, a few mule deer, and many "towns" of prairie dogs, which Dar think are the cutest thing going. If she could, she'd adopt a couple of 'em... which would be replacing me since I'd be gone. She also fell in love with this little burro. Women!? 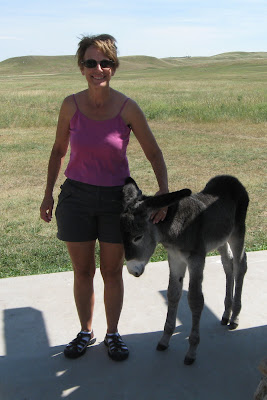