on October 24, 2011
Got started this morning at 9:00am. The general plan was to drive out to Woodland CA. the most distant point of our explorations today and finish with the State Capitol, the nearest point to camp.

For some time now, we've been toying with the idea of replacing the Toad (our Ford Focus) with a small pickup and small pop-up truck camper that would give us the capability to explore multiple days away from the bus-house, camp in more remote locations, and be more free and flexible. It's really a hybrid concept to use the bus-house as a mobile base camp and use the mini-camper for multiple day explorations. If we needed to, we could pop the top and camp anywhere away from the bus-house and not have to be concerned about time or the drive back to base camp each night. As I said, we've been thinking about it.

One of the requirements, as far as I'm concerned, for this to work is that we'd have a small truck (like a Toyota Tacoma) with a small, lightweight camper. It just so happens that two manufacturers of just that kind of camper are in the Sacramento area: Four Wheel Campers and All Terrain Campers. During the morning today, we visited each, met the owners and key people, and got a much better feel for their products. Four Wheel is the much larger business of the two and they had a good selection in their showroom for us to peruse, measure, and sit inside while we imagined actually living in one for a night... or a week?. There's really not much more to add at this point. We're still pondering the idea. 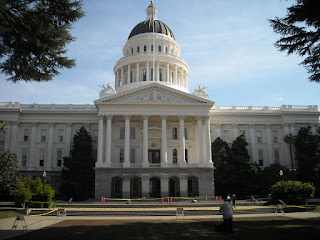 During the afternoon we drove downtown, found tha Capitol, and spent a few hours checking out the historic building. Built between 1861 and 1874, it's one of the oldest current statehouses in the USA. But all that remains of the original structure is the exterior edifice... the walls and columns. In the 1970s, it became clear that the building was crumbling and unsafe. Various proposals were discussed, including one to demolish the old structure and replace it with two modern office towers -- not unlike the disaster that happened in Tallahassee FL about the same time. But Californians, in a rare display of doing what's right, decided to rebuild the old structure.

There was little to guide the reconstruction... no original plans (burned up during the San Francisco Earthquake), just old photographs and things they found during the demolition like ornate ceilings hidden by replacement false ceilings. Tile floors were painstakingly documented, photographed, then taken apart... each tile carefully cleaned and cataloged... and eventually put back together again when the new interior was ready. Even the dome, which was being held up only by gravity as the ravages of time had deteriorated the mortar between the bricks, had to be taken down and reconstructed. The objective guiding the reconstruction was to return much of the interior to what it was about the turn of the century... the late 1800s or early 1900s. We were both impressed almost as much by the reconstruction efforts as we were by the original structure. Just magnificent. 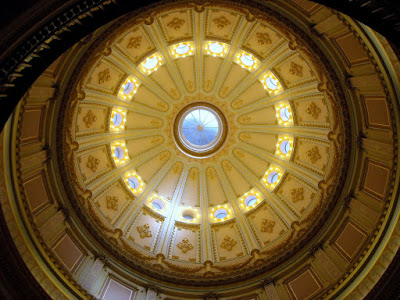 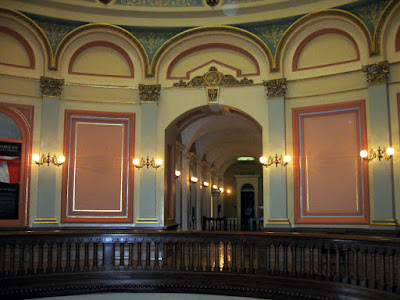 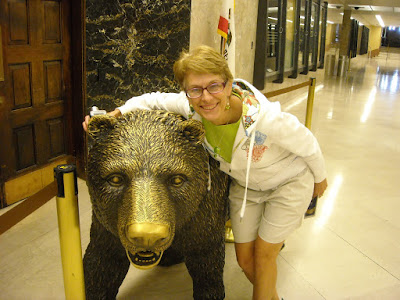 It is still the working Capitol and seat of government, but, like most other states, many of the functions of government have been moved to nearby office buildings. What remains in this building is both legislative chambers, some offices for the the executive branch, and the State Capitol Museum.

While perusing the halls of this statehouse we struck up a conversation with an overworked and very tired looking state employee. After chatting for a few minutes we exchanged business cards --> 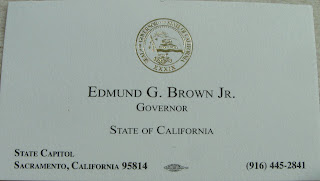 [dislaimer: not all events or people depicted in this post are true. Some are downright lies. Hey, lighten up... it's my blog!]  Oh, and as usual, you can click on any photos for a larger image... or go to our online albums for more.