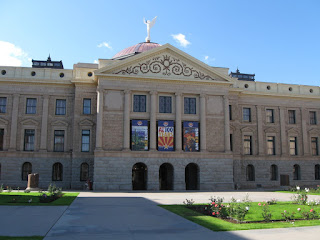 After dropping off the bus-house at Cummins Rocky Mountain in Avondale, we took the toad and made the 20 minute drive over to the Arizona State Capitol. The time had finally come to add Arizona to our list of visited Capitol buildings... I think this one will be our 20th.

If you've house-shopped recently I may be able to elicit some sympathy from you... how after you've seen 5 or 10 (or 15! or 20!!) they all start to look alike. OK, maybe not exactly alike, but they do seem to fall into groups... and it's very hard to distinguish between members of a group. The great ones may stand out, but the average, the ho-hum, the pedestrian, they all start to look alike. Anyone still with me??

Arizona is the last State admitted to the union among the lower 48 States... in 1912. This fact, among other things, led to the factual and oft heard statement during the Reagan presidency that the President (born in 1911) was "older than Arizona". OK, chuckle if you will, but it's occurred to me that, similarly, I'm older than both Alaska and Hawaii... as are many of the readers of this blog. Harrumph!

Prior to Arizona becoming a State, the Territorial Capital, alternated between Prescott and Tucson a few times before a compromise was reached and Phoenix, at that time just a small agricultural community, was officially made the Capital. Hmmm. Compromise? What a quaint old concept. If the polarized politicians of today had been involved, Arizona still wouldn't be a State and the Territorial Capital would still be floating back and forth between dried up towns in the desert. <end of political statement>

At any rate, the good folks of the Arizona Territory -- once Phoenix was selected -- went ahead and built a very nice but modest building as their Territorial Capitol and, with Statehood surely to follow, the State Capitol as well. That's the building that survived more than a century and still stands... looking much like it did shortly after it was built.

Today, it's the Arizona Capitol Museum. All of the functions of State Government have long ago been moved out of the building to newer, larger quarters in the immediate area. They generally did a good job of this... the House and Senate Chambers and offices are in two separate buildings that immediately flank the old State Capitol. Just out the back door of the old place, through a long attached hallway, is a 9 story Executive Branch Office Building.

But, alas, all is not well with even the newer buildings. According to Wikipedia:

"The Senate and House buildings, opened in 1960, have been deteriorating. The Senate in particular is prone to constant plumbing problems, and occasionally a broken pipe floods the entire building."

Thom's comment on the plumbing problem:  Hmmm. A plumbing problem in the Senate Building? Imagine that? Somewhere in there is a really good joke... or two. Do you suppose this plumbing problem could be the result of the volume, the sheer mass, of er, ahh... excrement... being generated by these elected folks in their passionate battle to be re-elected as long as they all shall live?

Thom's comment on the flooding problem:  Do you suppose we could somehow lock the doors when this happens and not let anybody out? Could go a long way to solving some of the State's money problems, including the plumbing problem noted in the paragraph above.

We joined a guided tour which pointed out the key functional and symbolic elements of the old building. By any State Capitol standard, it's a small place but nicely preserved, refurbished, and maintained as it was in about 1910. Arizona, being a state with perennial money problems, didn't build it overly ornate or with exotic materials (marble from Italy or any such thing as that). It's utilitarian, but comfortable and does in fact feel somewhat "Southwestern".

There's a humorous story about the figure of "Winged Victory" atop the dome, which actually functions as a weather vane... swinging around into the wind... whichever way it blows. A number of years ago some legislators felt it wasn't appropriate that "ol' Victory" would look away from them when the wind blew from the west. They felt she should always be looking at them, figuratively guiding them, always eye to eye. So they passed a resolution that the she be chained down... prevented from swiveling with the wind... always looking at them while they went about there business.

Well, as you'd expect and I'm happy to report, Winged Victory came out on top, victorious, with that whole sordid affair. She was subsequently set free and now happily spins with the wind again... just as most legislators spin in the political winds these days. The symbolism is so rich... ain't it wonderful?