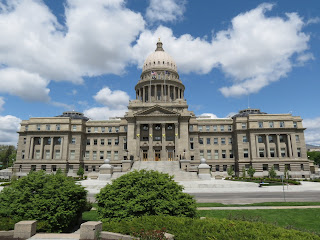 After yesterday's wind storm that resulted in us hunkering down at Mountain Home RV Park in the town of the same name, and after a good nights sleep, we were up and on the road at the startlingly early time of 10:30am this morning.  Dar came up with the great idea that if we could find a convenient RV park near the highway in Boise (which is only 45 miles away), we could do double duty today... that is, move and visit the Capitol of Idaho in the same day. So that's what we did.

With Boise less than an hour from Mountain Home, it didn't take long and we were there. We found a suitable parking site at Mountain View RV Park, near the Boise airport and just off I-84. After unhooking the toad and grabbing a quick lunch, we headed downtown.

Entering the downtown area it becomes evident that the Capitol... as large and stately as it is... is not the tallest building in Boise. No, since the 1970's, there are two Bank buildings (and soon to be a third) that dominate the "skyline" and diminish the Capitol both literally and figuratively. A sign of the times I guess... when the banking business is the dominant force in our lives.

Designed by architects John Tourtellotte and Charles Hummel, and built between 1905 and 1912 (the central part of the building, the rotunda, the dome, etc.), it's an impressive structure with 5 working floors and a massive dome that tops out at 208 feet. Built in stages, the wings for the Legislature (House and Senate) were added in 1920. That's the full structure one sees today. What's not seen are two large one-story underground additions built a few years ago that extend beyond the visible building and provide additional space for Legislative offices.

There are two things in particular that made this building stand apart from others we've seen and from what we expected: First, the building's interior is awash in natural light. The original architects designed-in large skylights, windows, and open spaces to brighten the interior. A large renovation project in the early 2000s removed false ceilings, walls, and other features that had been added over the years, and returned the old building to that envisioned by the original planners and architects. It's probably the brightest interior of all the 23 Capitols we've visited to this point.

The other thing that stands out is the lack of art and symbolism. The rotunda is a 4 story high marble lined, bright, impressive place. But what's not there is art... paintings and sculpture telling the story of the struggle and heritage of the people who made the State what it is. The reason for this omission isn't clear to me, but apparently the original planners made a conscious decision to let the building stand on it's own... to let it be it's own work of art... to tell it's own story.  Don't get me wrong, it's an wonderful building... one that the people of Idaho have a right to be proud of.  But in my humble opinion, having it help tell the story of the people could only add to the overall impact of the place.

With our job in Boise completed, we're planning to head out again tomorrow. The objective is the LaGrande area in Eastern Oregon, where we might spend the next few days. 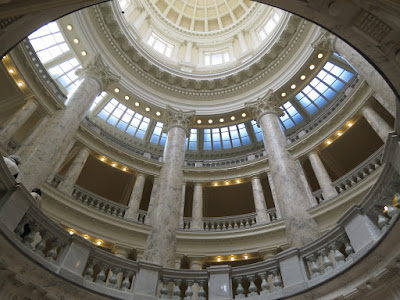