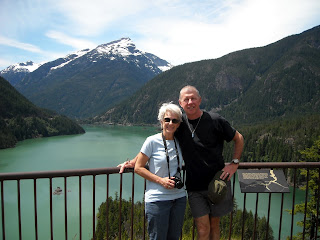 This is going to be an unusual report. I'm going to write about North Cascades National Park without our ever actually being there. We were close... made it to the visitor center... camped in the Park Service campground... could see mountains inside the Park boundaries... but never actually stepped a foot inside. You see, there's a several mile wide buffer along WA-20 that is not part of the National Park... I'm guessing an accommodation to the Seattle Light power utility that owns three dams along the Skagit River which the highway follows through the mountains. We consider this two night stop our "survey course" of the place, and fully intend to get back here to explore with more vigor in the future.

The Park's purpose is to preserve the wilderness and to provide back country hiking and backpacking opportunities for the public. It's very remote. Technically, there is one little unpaved road about 10 miles south of camp that takes jeepers to a trail head a couple miles inside the Park. But other than that, there is no vehicle access.

But the views are stunning... towering jagged snow-covered peaks, tall lush green forest, steep vertical rock faces with melt water falling everywhere... literally hundreds of waterfalls. The park contains more than 300 named glaciers tucked among the rugged peaks which, like most glaciers around the world, are shrinking due to warmer global temps. We encountered very few people compared to the frenzy common at other more popular NPs. The roads aren't crowded either and it was easy to feel like we had the place nearly to ourselves. 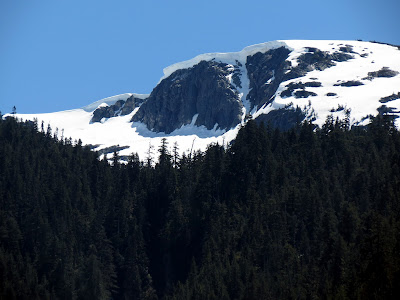 Today we explored by car along the Skagit River. The aforementioned three dams are Gorge (the lowest), Diablo, and Ross (the highest on the river). Each creates a pool used for electric power generation (for Seattle Light) and, secondarily, recreation. The pool behind Ross Dam is Ross Lake, which stretches 24 miles north of the dam into Canada. In keeping with the remoteness theme of the area, there is only one drive-to access to Ross Lake which involves an epic journey into Canada, hours of travel, long stretches on a gravel road, crossing the border for a second time to get back into the USA... just to launch your boat on the lake near Hozomeen. You can lug a canoe or kayak down steep trails to reach the Lake if you're motivated.

We learned of a floating resort on Ross Lake appropriately named Ross Lake Resort [link] that's rather unique. The only access to it is by boat, as it's built on large cedar logs and floating out in the lake. It's been here for many years, and peaked our interest as a get-away destination where you can really get away. There is no cell phone access, no TV, and only two phone lines used for running the business and for emergencies. The accommodations run from basic to modern... they do have electric power and fresh water.

It's possible to drive across Diablo Dam, and we did. On the other side we found the Diablo Lake Ferry, part of the transportation link to Ross Lake Resort, and the North Cascades Institute and Environmental Learning Center. The day we visited one of the dam spillway gates was completely open and provided some good photo opportunities.

I can't overstate the good feelings we developed for this part of the world. With much of our family being in the Northwest I can see a lot more time will be spent in and around North Cascades National Park. 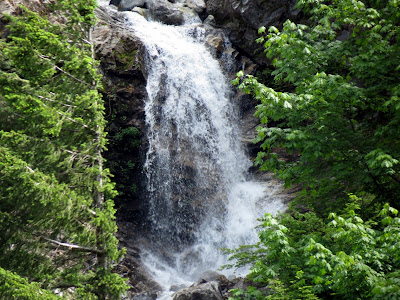