June 21 - Over the Cascades... and the Monashees too 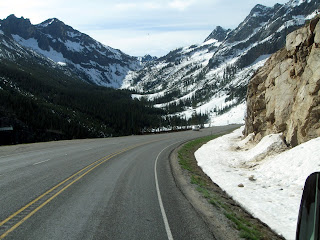 Anticipating a big travel day, we had the big wheels turning by 8:10am. Deteriorating weather would catch up with us if we tarried too long and both Dar and I wanted the full effect of white snow-capped peaks against a blue-sky background during the drive today.

The bus-house was functioning as it should and made easy work of the task. We ran into patches of snow alongside the road at 3,500' and before we reached either summit it was a complete heavy few-feet-thick snow pack. But the temps were mild, the sun working hard, and water running everywhere... drips to trickles to torrents. And light traffic made being here all the more enjoyable.

On the way down the PAC brake (engine compression brake) got a good workout, keeping everything smooth and under control. Going down mountains without this thing would certainly be more stressful and much slower.

Along the way we passed through the towns of Winthrop and Twisp in the Methow Valley, then back uphill and over Loup Loup Pass (4,020') before dropping again, this time into the Okanogan Valley. Good roads and good weather continued as the route took us northward along the Okanogan River before bending to the east again at Tonasket.

At this point the Cascades were behind us. But another sub-range known as the Monashee Mountains lie between the Cascades and the Rockies, and we've got to climb over them to get to Spokane. The town of Wauconda was followed by our fourth pass of the day, Wauconda Pass (4,310') and some miles later the fifth and lass pass of the day... Sherman Pass.  At 5,575', Sherman is the highest year-round pass in the State of Washington. The road through here is a narrower road than what we experienced over the Cascades, and in most places, there is little or no shoulder at all.

All day long we saw bicyclists who were riding... sweating... pumping... up the same passes we were climbing. These folks have my admiration, but on narrow curvy roads with no shoulders, they seem to be putting themselves at considerable risk. I'm not planning to follow in their tracks... at least on this road... anytime soon.

Down the other side we found the Kettle River, a short river that drops out of Canada and feeds into the Columbia. The Kettle is un-dammed, one of a very few natural flowing rivers in the Northwest. A few miles later we stopped at a Walmart in Colville, WA., to pick up a few supplies and a fill-in prescription for some medication.  At that point we were only a little over an hour away from where our friends Julianne and Jimmy are watching over a property for the summer. A quick phone call confirmed they were there and a great moochdock spot confirmed for the next few nights. (Link to Julianne's website)

For the day, we did a little over 300 miles in about 9 hours, including stops for fuel/lunch and supplies. With all the slower than usual mountain driving, and the fact that we don't drive to set land/speed records, we thought it was an enjoyable and productive day of travel.

[check back... more photos will be added a bit later]
2012 WA to WI Washington