Showing posts from June, 2015
Show all

So, What'ya Say We Go South for the Summer 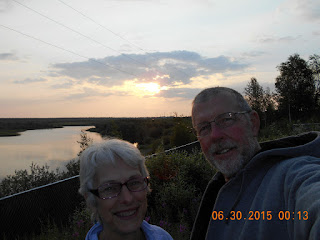 Midnight in Inuvik.  We spent four days and four nights in Inuvik, which, this time of year, look pretty much the same. After four nights, and days, and if you're out there mingling and talking with the locals, eating in their restaurants and cafes, shopping in their stores, touring their town... something changes. You start to feel, a little, like I know this place... I'm starting to fit in here... I like this place. It becomes a part of you... and you of it. That happened to me during four days and nights in Inuvik. But we must move on. And where does anyone with a truck and camper go from Inuvik? South, of course. It's the only answer. You get on that one thin physical ribbon of connection with the outside world, the ONLY road that goes somewhere else from there, and head south on the Dempster. Four hundred and seventy miles of gravel road, a handful of bridges, and two ferrys. That is the only way to the rest of our days in this part of the world. We feel we did
Read more 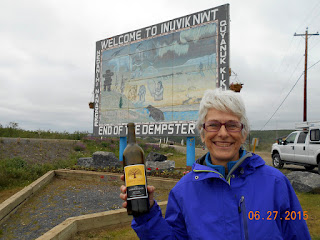 Miscellaneous notes from our 4 days in Inuvik. The sun doesn't set here for 57 days this year. I'm up at 3am. Of course it's bright outside, but the thing that gets me are the sounds of people... outside, partying, talking, moving around, whatever. It sounds and feels more like 9pm on a Friday night. Perhaps we all have the same need to socialize, play, party. Down south, in the land of daily darkness, we tend to spread things out. Up here, it feels like they're making up for the days during the winter when the sun is nowhere to be seen. Satellite dish antennae look like they're pointed at the tree across the street, or the neighbors house. Studying a globe shows that a direct line to a geosynchronous satellite over the equator does indeed require an almost flat shot at the horizon up here. Take that flat-earthers... how do you explain that? The warmest weather we've experienced on our trip has occurred at the highest latitude. When we arrived in Inuv
Read more 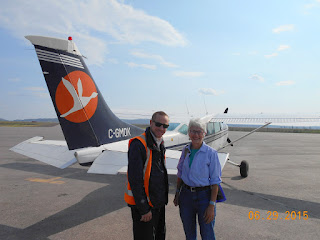 Dar with pilot Zach. One of our main reasons for coming this far north was to visit the village of Tuk. It's actual name is Tuktoyaktuk, but for obvious reasons, most people just say "Tuk". At this point the only way to get to Tuk in the Summer is by boat or by plane. There is no all season road. In the Winter, there is a winter ice road scratched out on a branch of the frozen Mackenzie River. And they are in the process of building a new all season road over the tundra and permafrost that's supposed to be done in a few years. They can only work on it in the winter, so it's hard to say exactly when it'll be done. And, with a number of companies offering Tuk tours, there are at least some people who aren't real crazy about seeing that new road completed. So what's the attraction in Tuk? Well, it's further north than Inuvik. Among the people who come to this corner of the world, being north is a big thing. The other attraction is that Tuk is
Read more

Tire Tales from the Dempster 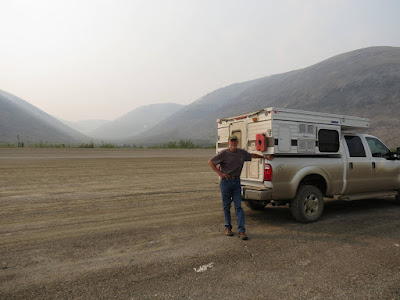 They said to bring two spares. We did. The first day on the Dempster, about kilometer 168 (mile 105?), the truck's low tire pressure alarm goes off. Damn! No place to pull off, but that's not a problem since traffic on the Dempster is pretty light. And we're in a relatively flat long stretch and, thus, well visible to other travelers. Pull over, sort of, and turn on four way flashers. My first quick inspection of our 4 tires didn't reveal an obvious problem, but a pressure check said our left rear tire was down to 40 psi, from the 80 I usually run. These are brand new 10 ply tires (load range E), all terrain tires, bought specifically for gravel and non-paved road use. Very discouraging. As I contemplated the situation, I could hear air escaping the tire, from the area of an embedded rock in the fat part of the tread. Hmmm. Nothing else to do but get into action and change the tire. Dar helped, as we had to remove a lot of gear from the packed back seat in order
Read more

Dawson City to Inuvik on the Dempster 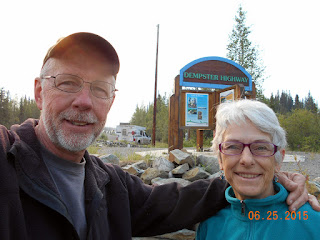 Notes on the trip up the Dempster to Inuvik. Thursday, June 25 About 25 miles out of Dawson is the junction of the Klondike and the Dempster Highways. The Dempster is the subject of this post. It's also one of the main reasons we've come this far north. For years, I've had the Dempster on my "bucket list". I've read about others doing it. I've dreamt of reaching the Arctic Circle and going beyond, maybe even to the Arctic Ocean. The Dempster is about 460 miles of gravel road that stretches from the Klondike Highway to the town of Inuvik. It was conceived and built in the 50s and 60s and was officially opened to public travel in 1979. Why is it a gravel road? Much of the road is built on permafrost. Gravel is a much more forgiving surface, and much less expensive to build, to repair, and to keep in good shape. Traditional road-building techniques produced roads that become soft and unusable when they sink into the thawed frozen ground called permaf
Read more 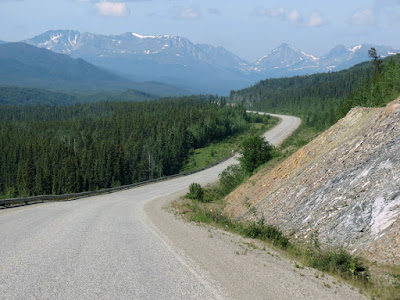 Monday, June 22 From Watson Lake to Whitehorse; Wolf Creek CG Had some fog this morning, but it mostly burned off by 8am and we were back on the road a short time later. Stopped at Johnson Crossing Lodge for lunch… grilled ham and cheese, and a cinnamon roll of course. I've mentioned this before but cinnamon rolls are ubiquitous up here. A big driving day for us. Racked up 291 miles. The terrain wasn't as dramatic or as impressive as the drive a few days ago on our way to Liard Hot Springs. But then, we're going to have to face facts that it's not going to be possible to reach new “highs” every day. I just love being this far north and savor the adventure of it too. Decided to secure a campsite at Wolf Creek CG, a few miles before Whitehorse, before running into town for a quick perusal. Even though it's a Monday, the CG was not far from full. Selected a site, paid the iron ranger, attached tag to site post, and set a couple chairs out to establish our cl
Read more

June 23, 2015
I'm sitting in a coffee shop in Whitehorse YT. The WIFI along our path has been pretty marginal to say the least. Even here, it's very slow. We've also been staying, often, in Provincial campgrounds, which definitely don't offer WIFI.  I've been writing and Dar has been processing photos, but we haven't been able to get them uploaded yet. That will come with time. This short post is to let you know we're doing fine and are having a great time. I have been able to get text messages out via InReach Mapshare (check the link on our Alaska2015 tab) as well as occasionally on Facebook. Today, after we're done here in Whitehorse, we're heading north on the Klondike Highway toward Dawson City. The plan is to keep heading north from there... until we can't drive anymore. That should be in the little village of Inuvik NWT, only a short distance from the Arctic Ocean. Rest assured, we're having a wonderful time. I almost have to pinch myself to ma
Read more

First Days on the Alaska Highway 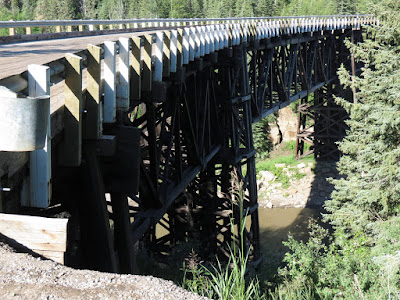 The Alaska Highway, the "Alcan" as it's also known, was built in 8 months during 1942. Those were tense days. Pearl Harbor had been attacked the previous December and there was great fear of Japan invading North America... first the Aleutian Islands (just 700 miles from Japan), and then, after they gained a foothold in Alaska, who knows? It was imperative to have a land route to Alaska for military mobilization as soon as possible. Ten thousand army engineers were hurridly rushed to various spots along the proposed route, along with equipment and supplies, and given orders to punch through a military grade road before the winter of 42-43. They did it. All 1500 miles of it... stretching from Dawson Creek BC to Delta Junction AK. It wasn't the prettiest road, as a matter of fact it was pretty damn ugly in spots. But they did it. The building of this road through forest, swampy bogs, mountains, and frozen tundra still stands as one of the great engineering accomplishment
Read more
More posts