Dec 31 - Our Christmas Holiday with Family

We had a good holiday with the kids and grandkids. For the most part, it's been an easy go... plenty of down-time with a party or two thrown in for good measure. Of course, "down-time" may not be the right term. When there are two energized boys on winter break from school around, it's gonzo-frantic around here much of the day.

As a family we haven't been together on Christmas in 7 years, so this one was special. Both kids, their spouses, the two grandkids, and us. It was a very enjoyable gathering... even if I had to sleep on an air bed for two nights.

It's the same every year. Much anticipation, planning, gifting, food preparation, libations, some football... and then it's all over. Just like that. I shake my head wondering what the heck happened.

Yes, we still have tonight... New Years Eve. But neither Dar nor I have ever been big NYE partiers, preferring to transit into the new year in our own quiet way. I mean, there really is no better time to contemplate the absurdity of life, the passage of time, the immense cosmos, and our tiny dust-speck place in it all.
By Thom Hoch at 12/31/2013 10:17:00 AM 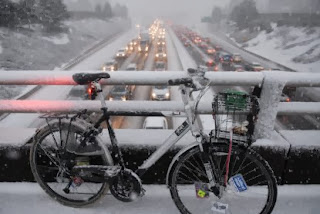 (I'd like to write about something other than the weather, but weather is dominating the news these days... some even going so far as to call it an "epic" event. Besides, I don't have much else to write about.)

The big news around the Pacific Northwest is the unusual cold blast that's descended over the area... not to mention most of the rest of the country. The weather folks say it's unusual for two reasons. First, cold waves of this magnitude don't hit the Northwest every winter... perhaps, to one degree or another, every two or three or four years... maybe longer. Second, this one is notable for it's persistence. It's just hanging around... not moving along like good cold waves should. By the time we're back to a more "normal" pattern the better part of a week will have passed.

And we were there!

In addition to the cold, we woke to a half-inch of snow on Friday. OMG! It must not have been snow... it must have been the sky falling. Schools were closing, cars and trucks littered the shoulders and ditches of roads and highways, travel times were reported in hours instead of minutes. It was crazy. Of course Dar and I could read and hear about it all from the comfort of the bushouse as we had no schedule or place to be that day. For the uninitiated, this is the reason for the trouble: road salt is not used out here. When a light dusting of snow is repeatedly driven on it packs down and turns to a thin layer of ice. Good old fashioned slick ice. Add to the mix drivers that have little experience with (or memory of) winter driving skills. Then, when these drivers are preoccupied with their electronic screen devices, well, it all adds up to some fine entertainment for the rest of us.

Road salt is one of those love/hate things... another big compromise in life. It certainly helps keep roads ice free in winter, but it plays hell with steel parts on cars. You'll find driving is much easier, but you'll have to buy a new car when the old one rusts away in a few years.

Tonight is supposed to be the worst of the cold in the PNW. The predicted low tomorrow morning is in the single digits... 8 or 9 degrees depending on the forecast. While close, it won't be a record for us and the bushouse. We saw 6 degrees one morning in Marathon Texas a few years ago.

How are we doing? Having spent most of our lives in the Midwest (where, even now, it's much colder than here) we're managing just fine. With a good attitude and the right clothes we 're enjoying this "epic" cold wave. We are, however, going through mass quantities of energy keeping everything warm. 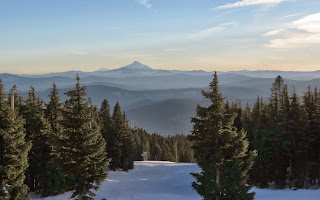 When I last wrote in this forsaken and neglected blog we had just arrived in Portland after a marathon week of 400 mile days, headwinds, cold nights, and junk food. In retrospect, it now seems like a quick and painless transit from the Midwest to our someday-soon new homebase in the Northwest. And we're certainly enjoying being close to the Northwest branch of our family - especially during the holidays.

As usually happens when we park and become preoccupied with family affairs, the old blog suffers. And that's just the way it is. Probably isn't going to change anytime soon.

We've been splitting our overnights between the "flat" (our apartment at Gage and Andrea's house) and the bushouse. Having our own more or less set up apartment at their place is a real convenience. Instead of driving back to the bushouse after a long day of chasing after the kids, we can just slip upstairs and climb into bed.

But after six and a half years simple momentum keeps us coming back to the old bushouse. There's a comfortable familiarity about the old 'wheel-estate" that's hard to describe... I mean... it's home, ya' know?

A couple Fridays ago we did take a day, just the two of us, and drove the Gorge - Hood River - Timberline Lodge - Hwy 26 loop around Mt. Hood. I'll do a separate post on that. And we spent the long Thanksgiving weekend with Justin and Kaytlyn at their home in the Seattle area.

Supposed to be cold this week. Some forecasts are predicting lows in the teens and highs barely making it above freezing. So I cut some extra wood for the bushouse fireplace, filled the propane tank and the fresh water tank, and stuck a trouble-light (hot bulb variety) down in the water bay. We dial-down the furnace when we're not staying over there but even if the power goes out, for whatever reason, we should avoid frozen water lines in any case.

The way things look now, we're delaying our train trip back to the Midwest until January. One thing I'm realizing is that life gets more complicated when you have two RVs.
By Thom Hoch at 12/03/2013 12:13:00 PM
Newer Posts Older Posts Home
Subscribe to: Posts (Atom)