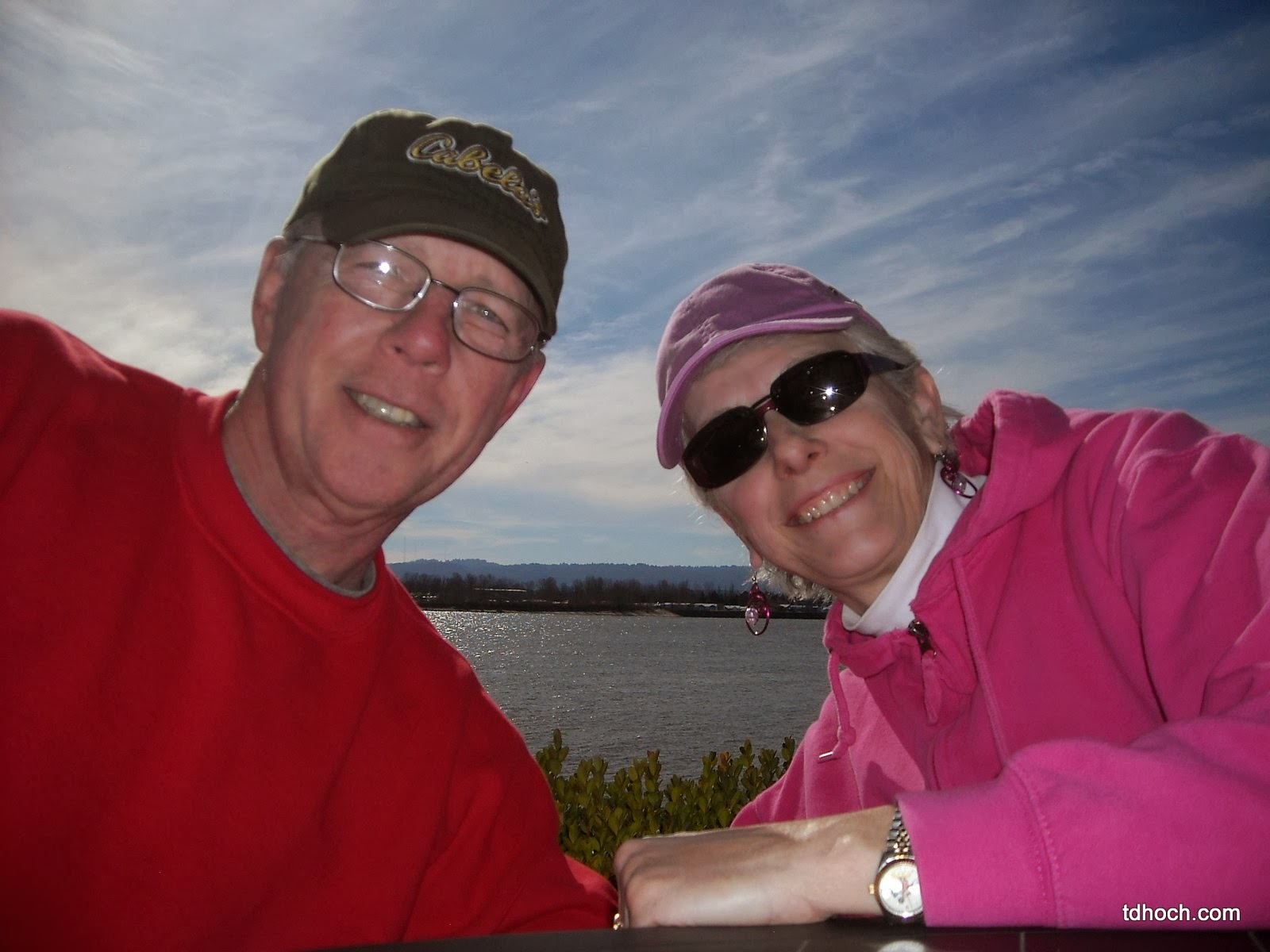 Attached photo was taken about 1pm today, February 28. Yes, that's the much-coveted Columbia River in the background. And those'd be just sweatshirts we're wearing. And that'd be blue sky up there above our heads. Saints be praised...I knew it was there all along. In the PNW one is to be forgiven for loosing faith... for doubting that sun and blue sky even exists any longer. But days like today, well, they're just the best and our faith in the future is restored.

But all that aside, the best thing about that photo is that we were having lunch... outside.  That's right, it's February and we're dining al fresco in the PNW. Family and friends in the Midwest probably don't want to hear about this (temps below zero there again this weekend), but we're really soaking it in.

The past couple weeks I've felt like one of those ducks you see sitting on a pond during a rainy morning... not much going on so ya' might just as well enjoy life. The phrases "this weather is for the birds" or "nice weather -- if you're a duck", have taken on more meaning. It's been quite a few years since I've spent this much time in the PNW in late winter/early spring, and I'm getting re-familiarized with just how much it can rain... how dreary it can be... and why, this time of the year, so many people up here contemplate putting a squirt-gun in their ear... hoping the sun will reappear before they just can't take it any more and must forcibly flush that moss-plug out. Oh, and another thing... this is probably why the good citizens of Washington legalized the private use of pot. Ya' know, man... it just helps ya' cope.

But one must remember that all the rain is what makes this corner of the country so lush and beautiful. It freshens streams and waterfalls, moistens the ecosystem, waters the trees, fills the reservoirs, fuels the hydroelectric power plants, and the dreariness keeps most Californians where they belong... in California.

Speaking of our large, friendly, but weird neighbor to the south... I think it only fitting that we help them out by sending some of these storms we're getting down their way. They're in the grips of a record-setting drought and can certainly use it. The way I see it, if we donate enough of our water from the sky, that'll delay a little longer their planned Columbia River Apportionment Project (CRAP)(if you think I'm kidding, just try Google-ing it) (or click here for more).  Even though we don't hear much about it, PNW'ers know they're working hard behind the scenes to set up the political and financial power structure to enable them to tap into the Columbia River System and get the other 49 states to pay for it. It's only a matter of time before our rich water resources are piped or canaled southward to help them maintain the lifestyle to which they've become accustomed. Why, it's almost a right, isn't it? I only hope I don't live long enough to see the PNW drained of it's lifeblood.

As far as our status is concerned, the bushouse is still at the RV Park in Portland (we're into our 4th month here). The truck and camper are parked alongside... it's a little tight but for a short time it works. Dar and I are spending much of our time watching our grandkids. However, in the next week or so, we're going to take the bushouse down to the SKP park in Sutherlin, where we're high on the waiting list. The plan is to snag a membership and lot in the next few months and use it as our PNW homebase for the next few years.

We're also discussing our plans for the future and contemplating another minor change. You'll have to wait for more on that one.

Spring and warmer weather is just around the corner, isn't it?

Feb 12 - Back Home in Portland

Got into Portland last night (the 11th) about 6pm. Had a great day for traveling... the best of the four "moving" days since leaving Wisconsin. The weather gods rewarded us with a calm day; flaccid flags all day long. Of course that, as well as the fact we're now going downhill, really boosted the mpg numbers. I'll do a separate post on our impressions of the truck and camper after this 2200 mile drive.

We did drive into a slow steady rain as we neared Portland but, hey, it's Portland... and it's winter. It's the kind of dreariness that we've grown to love. Discussed dinner and worked ourselves up a hankering for Chinese. Found a little joint not far from where the bus-house is parked and took care of that issue.

Got to the bus-house and unloaded the essentials; the rest will wait until morning. We were gone for nearly a month and the "old girl" survived all the nasty Portland weather (snow, ice, wind, etc) just fine. Added a little heat, ran some water, poured a couple fingers of fine aged Scotch to mourn and to celebrate. Took a deep breath. It's been a hell of a month.
By Thom Hoch at 2/12/2014 09:41:00 AM

Weather kept us in Laramie for three nights, but our philosophy of "going with the flow" coupled with a bit of serendipity had us really liking this little college town before we left. With a population of about 35,000, it's tucked between the Laramie Mountains to the east and the Snowy Range to the west, at an elevation of a bit over 7,000 feet. The people we met were generally easy with a smile and quick to chat. We made it a point to get back here during the summer which, we're told, is "prime-time".

The forecast for the rest of the week is windy, then windier. If we didn't take advantage of today's relatively calm conditions, we might have qualified as citizens of Laramie. During the past few days the State Patrol closed I-80 through here a number of times due to wind and accidents. It happens frequently during Winter.

We were on the road by 7:20 this morning and continued our battle with headwinds. Other than that we had a good day and made good time. We stayed on I-80 all the way to I-84 at the foot of Echo Canyon, just above Salt Lake City. I-84 will be our route for the rest of our run into Portland. We're at a motel in Burley Idaho tonight and anxious to get into Portland tomorrow afternoon.
By Thom Hoch at 2/10/2014 08:21:00 PM

The "high"-light of the day was our transit of Sherman Pass... the highest of any point on I-80 (8,640 feet). But we didn't just cross the summit, we did it in the middle of a snow-shower that blinded drivers, made the road slick, slowed traffic, frayed nerves, and nearly put the safety director into shock. It was a hairy half hour but one we won't forget. Certainly not something I'd want to do with the bus-house.

But our immediate future is uncertain. According to the Weather Channel, the winter storm named Orion is, and will be, causing mayhem across the USA for the next week. For us, predicted 50+ mph winds, snow (and other more solid forms of precipitation) will probably keep us in Laramie for a couple days. If we're lucky we'll be here for a couple days. If we're not lucky, we might be here till Phil the rodent finally releases winter's grip on us... maybe April???

This will be brief:

A tad cold this morning... about 5 below zero at 9am when we finally left Beaver Dam on our way to Portland. Battled brisk westerly winds most of the day, which kept our "mpg's" nearly as low as we get with the bushouse. Other than that it was a nice day for travel. Made it to Lincoln Nebraska tonight before we threw out the anchor.

Our objective is to get as far west as possible... as quickly as possible... before the weather out west goes downhill for a few days. However, tomorrow looks good for our run across Nebraska and into Wyoming.

Mileage today was around 500. The truck is running and handling very well... I'm very impressed with the way it's taking the miles in stride.

And in case anyone is wondering, NO, we're not sleeping in the camper tonight. Sub-zero temps motivated us to find a motel... complete with a big king-sized bed and strong hot shower.
By Thom Hoch at 2/06/2014 08:25:00 PM

Feb 5 - A Cold Shoulder from Wisconsin

Our time in the Midwest is drawing to a close again... at least for this trip. What started out as a quick trip back to get the truck camper turned into a three week stay that included the death of my Mom, her funeral, cleaning out her apartment, and tying up all the other loose ends that needed tying. It's been traumatic and emotional for the family but we're finally coming back to a semi-normal place. And Dar and I are sooo ready to get back on the road.

This crazy cold January weather isn't exactly cooperating with our plans. Of course we'd like a week of calm weather all the way West, complete with warm tailwinds and sunny skies. The reality is that we'll likely have quite the opposite. But we're so ready to go that we just picked a day, tomorrow (Thursday), and will hit the road and take on the challenges as they come. Some needed adventure perhaps.