Showing posts from September, 2015
Show all

Recently, it seems to me, there are a lot of bloggers that have either suspended their blogs or stopped blogging altogether. It's possible that my impression is due to the selection of blogs that I look in on, which are mostly the blogs of RVers and travelers. But then again… perhaps not. Blogging went mainstream in the mid 2000s. When I started, in 2006, there were a good number of RV travelers that already had blogs. It was something new, something fresh, and the bubble of people getting into the RVing life in those years were quick to respond. In our first years on the road, (2007 – 2008-ish) the vibe was that every RVer needed  a blog. In fact, there were seminars at rallies that expressed that very sentiment. Blogging rapidly became a fad, something expected, something assumed. But, like all fads and meteors, expect it to brighten and fade. Since many bloggers were/are in it for the social networking aspect, it seems a natural evolution for blogs to migrate to tools desi
Read more 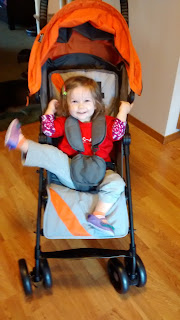 Pretty darned pleased with her new wheels. Tuesday, Sept 15 We're up in the Seattle area at this writing for a couple weeks soaking up family time with our son, daughter-in-law, and our little grand-daughter. They have a gap in child daycare arrangements and we're excited by the opportunity to spend time with them all, and to really get to know the delightful little sprout. Sandwiched between our Alaska/Yukon trip and this Seattle gig, we had about a week and a half back at our home-base in Oregon. I anticipated needing to wash the motorhome and car in addition to the truck and camper upon our return, but the elements were kind to the mothballed machinery and we only focused on the truck and camper for now. Camper was detached from the truck and both were scrubbed down. I'm a fan of waterless carwash products, but this job necessitated an old fashioned soap and water and lots of suds washing that would have made my Dad proud. The waterless cleaner was step two. The
Read more 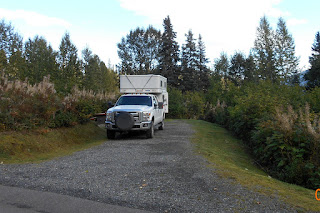 This week began with us finishing up the Cassiar Hwy. and then working southward through British Columbia on our way back to Washington. It also marks the end of our great adventure to the far north. This is the last travelogue post for the trip. Sunday, August 23 - Meziadin Lake CG to Smithers (day 78) Meziadin Lake Provincial CG Campsite at Meziadin Lake Hey, sunshine this morning. Nice to see. Perused campsite when I got out of camper and saw no additional evidence of the bear that the campground host said had wandered around our campsite before we got here yesterday. We kept looking for him/her as we prepared to leave, but nothing.  Probably found a better berry patch further up the hill. Just a short drive south to Kitwanga at the southern terminus of the Cassiar where we spent a little time checking out the historic church and totem poles referred to in the Milepost guide. A local native walked over and gave us a more detailed history and a little of the story depict
Read more 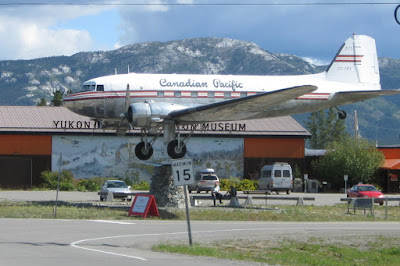 We began this week in Whitehorse, the Capital City of the Yukon, where we lingered for a few days. From there, back on the Alaska Highway, the Alcan, through Carcross and down to the junction with the Cassiar Highway. As we dropped south on the Cassiar, we took a side trip to Stewart/Hyder. This old DC-3 found a new life as a wind sock. Sunday, August 16 - Whitehorse Local (day 71) Wolf Creek CG The campground is max'd out this weekend. Discovered the reason why: it's a three day weekend here in the Yukon called Discovery Day. Has to do with remembering the day they found gold on Bonanza Creek, a tributary of the Klondike near Dawson City. So, like folks anywhere, they're taking advantage of a summer three day weekend... one of the last, if not the last, of the warm season this far north. We ran into town for a much needed internet fix and a laundromat. Managed to get a bunch of photos uploaded as well as my post for last week. Another reason we're lingerin
Read more
More posts