January Trek to the Southwest

During our fulltiming years, we’ve tended to gravitate southward during the core of Winter. For a few years we found a cold-weather home along the Gulf Coast of Texas, but with the evolving transition of our homebase to the Pacific Northwest, we’ve recently found the Southwest more to our liking, and certainly easier to get to. And so it is that this Winter again, we’re heading off to Arizona for a couple months. After a dreary month or two in the PNW, a little sunshine and warm-ish weather works magic on the spirits and emotions of a nomadic traveler.

With preparations more or less completed (at last), we were finally underway about 9:30 Sunday the 10th. I passionately like travel, but the preparations drive me crazy. I’d love to just toss a quick bag in the truck and go… head out on the road. But Dar keeps reminding me that it might be good to have a few supplies, a little food, some gear. You know, a few things that our survival might depend on? 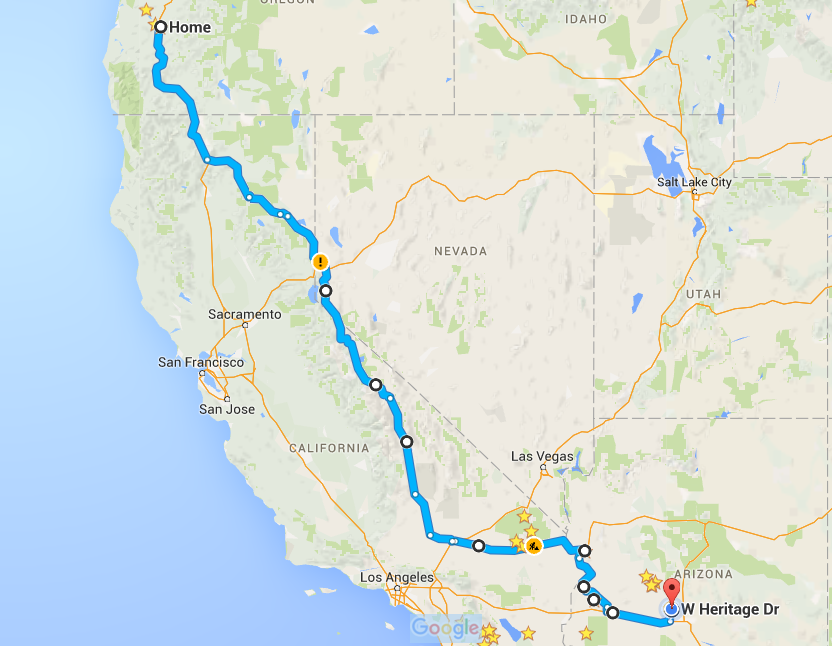 I was really looking forward to the route. I-5 to CA-89 on the south side of Mt. Shasta, CA-44 at Old Station to CA-36 which took us into Susanville. Just outside of Susanville we picked up US-395 which was the centerpiece of the trip south this time. 395 is a north/south route that hugs the back side of the Sierra Nevada Range along the eastern border of California. At Kramer Junction we take CA-58 over to I-40, then AZ-95 through Lake Havasu City and the Parker Strip to AZ-72 to and through Bouse and down to I-10 and into Phoenix. Took the 303 up the west side to Sun City West. According to Google, total driving time and mileage should be about 20 hours and 1200 miles.

And it also looked like the weather was going to cooperate with our plans… a veritable hole in this year’s “El Ninõ” storm, as it were.


The first night we spent at a Courtyard by Marriott on the southern edge of Carson City. It was over our usual budget by we splurged because it was after sunset, I was done driving, and because every once in awhile you just gotta treat yourself. The joint was certainly not busy (Sunday night, January) but they did have alcohol and some food. Don’t normally pay $12 for a glass of wine… but we did. And it was actually a wine that was almost worth that, some version of Estancia. Enjoyed it a lot. Also split an expensive sandwich and soup.

The second night we stopped in Lone Pine, literally in the shadow of Mt. Whitney, tallest peak in the lower 48 at an elevation of 14,505. Stayed at a Best Western… the Frontier Motor Inn if I remember correctly. The front desk of the motel directed us to The Grill, what they claimed was the best bet for a good meal in the little town of 2000. After a quick perusal of the famed Alabama Hills movie set area west of town, we did stop for dinner at The Grill and had an exceptional time with the waiter, Bobby. He’s an older… ah, mature… gent who I thought was the owner. No, not the owner… just loved his job. We were early enough to be the first patrons of the evening. He saw us walking to the front door from the parking lot and had our table completely set, including waters, by the time we passed through the door. Both the company and the food was very agreeable. He must have enjoyed our banter too as he topped off our by-the-glass wines with nearly a second glass… no charge. Considering it’s a Monday, in January, in a very small town, I was impressed with the steady flow of customers through the restaurant. No doubt it was the happenin’ place in Lone Pine. 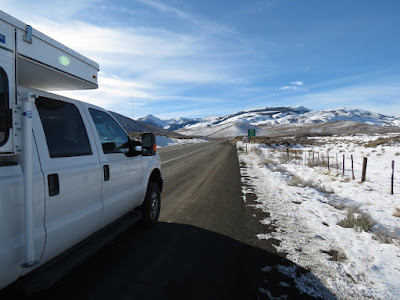 The third night we stayed in a previously visited desert boondock spot near the junction of I-40 and AZ-95. Turned off at the next exit to the east, and drove a mile or so south out into the desert. We had been here a few years ago while visiting the Lake Havasu area looking for boondock areas for future reference. This one was definitely NOT motorhome accessible, but was “easy-as-pie” for an F-350 and little camper. Got there early enough in the afternoon to soak up some sun, but no effort was made for a campfire. Not another person for almost as far as we could see. By morning the temperature was near freezing, but we had slept well. 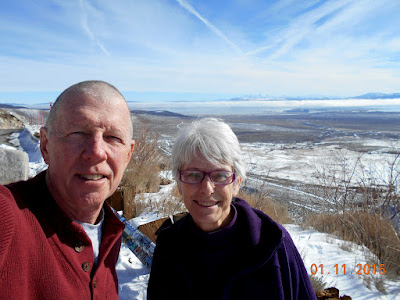 Notable observations and happenings along the way:

The “winter wonderland” drive through the Shasta National Forest. The day was windless and bright clear blue sky made for a wondrous scene. Recent snow filled the boughs of pine trees to capacity, which randomly surrendered and dumped their snow load in a mini-blizzard, much to our delight. Even in Wisconsin, winter days like this were rare.

Gas prices in California, especially along 395 and out near the Mojave Desert, were just stunningly high. With per gallon prices hovering near $2.20 in Oregon and under $2.00 in Phoenix, this area in between was selling the same stuff for between $3.00 and $3.79.

During our trek, the Powerball Lottery jackpot was over one billion dollars… highest ever. The Wednesday night drawing produced three winners who will share the $1.6 billion jackpot. The furor did motivate us to contribute $4 for two nearly impossible chances. A few bucks for a fantasy, is how I look at it.

The drive on Hwy 395 between Carson City and Lone Pine was better than hoped for. Once again, we lucked out with about the best weather conditions a traveler could ask for. With a coating of winter snow, the Sierras are just spectacular. This was the reason we drove this route. This was what we came to see.

At one point, Dar encouraged me to turn around and go back to a small parking area at Mono Lake. She had a picnic in mind and it was a good idea. The asphalt parking lot was still coated with an intermittent layer of snow and ice which mostly kept other travelers from intruding. An enjoyable break in a scenic drive. 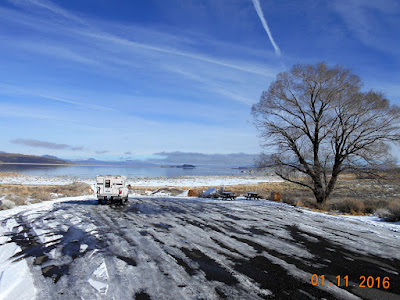 Nearly constant sun during the day is such a contrast to the nearly constant gloom that can be the PNW during winter. More than warmth, old Sol is what I crave during the winter in the Southwest. This winter, a strong Ninõ has resulted in a rather wet Southwest, and a somewhat cooler period as well. We’re hoping for a moderation of that effect.

We also made a quick stop in Barstow at the historic Harvey House, also known as CASA DEL DESIERTO. Another in a series of handsome railroad terminals along the old Sante Fe main line, it’s currently a community multi-use facility. The main level has two large rooms that were dedicated to food service… one more formal dining room and the other a huge lunch counter that could seat more than 50 people at once. While not as architecturally significant as La Posada in Winslow, it’s another glimpse into the elegant history or rail travel in the early 20th century.

Here are a few more shots from our trek.