Showing posts from May, 2016
Show all

Into Wisconsin and our Summer Home - Day 10 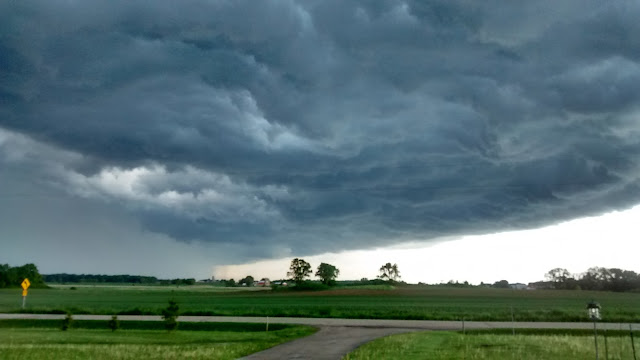 Thursday, May 12 Our last traveling day for this leg of our travels.  Usually looking for new routes we hadn't taken before, we took IA-3 from the Cedar Falls/Waterloo area to Dubuque. Now we're back to our original stomping grounds. And first on the agenda, now that we're "home", is a stop for lunch in Potosi WI, at the famous Potosi Brewing Company. Enjoyable, as always. We learned that they have a penchant for hiring brewmasters named Steve. They're on their third one. Learned that Dar's Mom and Dad, our hosts for the summer, were having visitors tonight. Bill and Nancy who spend the summers in the UP of Michigan would be stopping by and spending the night. On our way into town we stopped for a few dinner supplies, and arrived at our summer home about 4pm. Recap: This trip from Oregon to Wisconsin was 10 days (9 nights on the road).  It was 2,473 miles. The F350 used 199.8 gallons of gas ($436), got 12.4 mpg. We camped for 5 nights, motels for 4
Read more

May 11, 2016
Wednesday, May 11 When a couple travelers (us for example) travel from west to east across the continental United States, one runs the risk of getting under a nasty dark cloud and then following it all the way to your destination. Weather generally moves from west to east too. It's just the way it is. Much quieter morning after the fireworks last night. Continued on US-30 into Iowa, crossing the Missouri River between Blair NE and Missouri Valley IA. Mostly cloudy all day today... that dark cloud mentioned in the preceding paragraph. Just east of Ames, picked up US-65 north to US-20 east. Not much to report about the drive today. It is Iowa after all. Oh... we did stop in Carroll IA for lunch at a Culvers. We have some friends who live in Cedar Falls IA so we thought that'd be a good place to stop for the night. Weather was still "iffy" (that same cloud) so a motel seemed like the right choice once again. Attempts to reach our friends were eventually rewarded w
Read more

May 10, 2016
Tuesday, May 10 A nice quiet morning, partly sunny. No wind. A long day today as we follow US-30 east, through North Platte, Lexington, Kearney, and Grand Island. The temperature was climbing as the day wore on, and could only be described as "hot" when we stopped in Central City for an ice cream cone. A little further on, near Columbus, we checked out some possible camps, none of which was agreeable to us. Tired, hot, a dearth of camping possibilities, and increasingly threatening weather prompted us to "call an audible" and check into a Days Inn on the east side of Columbus. Weather continued to deteriorate, heavy weather warnings were issued, and between watching out the window and keeping an eye on the weather radar we entertained ourselves until things settled down late in the evening. Nature provided entertainment is usually preferable to what's on the tube these days. Decided our decision to motel it tonight was the right choice.
Read more

May 09, 2016
Monday, May 9 Woke in Scottsbluff at Riverside CG, a very nice city park along the North Platte. The sun was shining and it looked like a good day. We've noticed high water all along the North Platte as we've followed it east, the result of strong snow melt and some heavy rains higher in the hills. But here in Scottsbluff, the water is so high, and rising, that it's predicted to go into flood stage any day now. In all likelihood, Riverside CG will be closed in a day or two until the river subsides. Just across the river to the south is Scotts Bluff National Monument . Serving as a landmark for thousands of years for early Americans, and then for emigrants as they walked to new lives in the West, this series of tall sandstone bluffs dominates the surrounding flat land. Mitchell Pass on the Old Oregon Trail runs directly between Scotts Bluff to the north and South Bluff to the south. A trail follows this historic route through the pass. It's possible for smaller vehicl
Read more

May 08, 2016
May 8 Sunday After a quick nearly all carb breakfast, we were on the road again by 9:30. The Baymont motel in Casper was comfortable and preferable for us. Camping in near freezing conditions with the little camper takes some effort and at this point in my life, taking advantage of a motel once in a while is a viable option. South (east) on I-25 for 90 miles to x92, for US-26. To Guernsey.  Checked out Oregon Trail Ruts Monument and Register Wall -- two places where real evidence remains from the passage of the emigrants. Quite impressive. Continued down to Fort Laramie (the town) and stopped at Fort Laramie (the fort). During our visit there the sky darkened and a huge T-storm gathered to the south, eventually chased us out. As we drove east on US-26, I thought we'd outrun it, as radar indicated it was heading north. And we kept outrunning it until we got to Scottsbluff, checked the radar, and it looked like we were out of harms way. But don't get too comfortable, as it k
Read more

May 07, 2016
May 7 Saturday The rain that messed with us yesterday wasn't falling as we left Jackson, but it looked like it could at any minute. We made the quick run down to Hoback Junction south of town, to regain our trail, then made the turn onto route 189/191 which carried us toward the east and south. Initially, the road follows the Hoback River through the spectacular Hoback Canyon. This is the land of the original mountain men. Men like Jim Bridger, Jedediah Smith, and Bill Sublette lived and worked in these mountains during the early 1800s. It was a unique time, sandwiched between discovery and the arrival of emigrants, that lasted about 30 years. Off to the east and below the threatening clouds were the snow-covered Gros Ventre Mountains; to the west, the Snake River Mountains. Whether a day is clear or cloudy, the mountains are rewarding. I don't know why, but they just do something for me. On our way south toward Farson there is an interim summit that made us ascend into th
Read more

May 06, 2016
May 6 Rained during the night. Woke to an overcast sky and the promise of more precipitation. Broke camp during a lull and rolled out the gate at Craters of the Moon National Monument before 9am. Uneventful drive to Idaho Falls, where we fueled and filled-in a few desired grocery items at an Albertsons store that was experiencing a widespread electrical and refrigeration problem. All freezers and coolers were wearing sheets of plastic and people were scurrying about trying to solve the problem. Out of town on Hwy 26. Stopped at Palisades Dam on the Snake for a look see. As we sat there we were hit by a burst of very high wind and heavy driving rain. Waited out the heaviest. But slow going against the storm for a while. At Hoback Junction, due to weather, time of day, slim prospects for resources around South Pass, we decided to go the 20 miles into Jackson and call it a day. Room at Pony Express Motel at corner of WY22 and US26. Beer and lunner at Snake River Brewing. We'd spe
Read more

May 05, 2016
May 5 Dawn broke early over our camp at Silver Creek. Unfortunately, we slept through dawn and awoke at the break of, maybe, 8am. A fine morning. From camp, in most directions, there were no physical artifacts or evidence to suggest that anyone had ever been here before. I could see the snow capped Sawtooth Range dominating to the north. There was Silver Creek some 20 feet from the camper, riffling as it rushed by. There were miles of prairie between the two. But nary a structure or road or power line or anything that wasn't natural. From this point, this may have been the same scene I would have seen 100 or 200 years ago. Who knows? Drove through Carey and made our way to Craters of the Moon NM. A brief stop at the Visitor Center was cut short by a swarm of kids from a local high school. Got campsite then went exploring. A series of short hikes... one to top of a cinder cone, another to a feature called tree molds - where hot lava inundates areas of standing and fallen trees, c
Read more

May 05, 2016
May 4 After a fine sleep at Clyde Holliday State Park, we were up and moving by a little after 9. It's beginning to look like the weather will push us to some degree as a system is forming that's going to turn the whole western USA into a shitstorm for a few days over the weekend. With our motivation thus heightened, moving becomes a higher priority. We're aiming for the Craters of the Moon National Monument in Idaho. Neither of us have visited this place in the past and it's right along an east/west route segment we've likewise not taken before. So the decision was made to set course, without haste, for CRMO. The route used US-26 from John Day to Ontario, I-84 through Boise to Mountain Home, then US-20 up and over to Carey ID. A bit bedraggled from the longish 300+ mile drive, we found an agreeable camp along a creek on BLM land about 8 miles south of Carey. Tomorrow, which the weather gods have predicted will still be mostly sunny and nice, the plan is to e
Read more

May 03, 2016
May 3 I love traveling. But I don't love getting ready for travel. The past couple days have been brutal. Putting a camper in mothballs every couple months almost makes one consider just taking the big old beast along instead of parking it. Tempting, at least during times of work related stress. But I know that wouldn't last long either as we've come to like exploring in a smaller rig. OK... end of the negativity. We made it out of the chute today. Began the trek back to Wisconsin... our homeland. Unfortunately we both have medical check-ups scheduled back there for the week of May15. That gives us barely two weeks to cover 2400 miles. Not a "balls to the walls" cannonball run, but also not the leisurely, month-long, trip of a couple years ago. It is what it is. We'll make it enjoyable. For the record, we followed the McKenzie River on OR-126 up into the high Cascades, down the backside into Sisters, then over to Redmond and Prineville. Pressing eastward
Read more
More posts