For the Record -- Our Trip from Oregon to Wisconsin 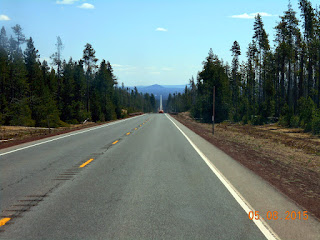 Despite my efforts to keep this blog from becoming a repetitious recounting of daily activity, I will have to, from time to time, summarize our travel days in more detail in order to keep the "record" a little more complete for the annual blog book we print each year for our family. It's been decided that future generations may find these details important. So here goes...

We departed from Sutherlin on the 8th of May and arrived at our destination in Wisconsin on the 12th. Five days on the road. To keep it from becoming a "get there as fast as possible" trip, we did find a few interesting routes through Oregon, Idaho, and a part of Montana. Here's a quick rundown of how it progressed.

Day 1: A good weather day. Finally got moving a little after 9am. We took OR-138 along the North Umpqua River (twisty and scenic), made our way around Bend, and then headed east on US-20 through Burns to Ontario. The Malheur River (winding and scenic) provided visual entertainment through eastern Oregon. Just across the Snake river we found a camp north of Weiser Idaho. Cold night but we had the coveted power hookup. (472 miles) 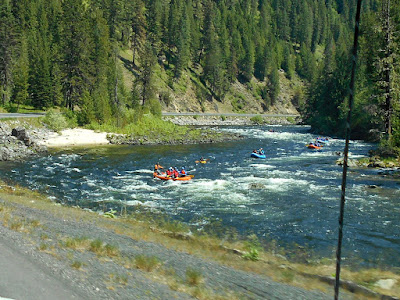 Day 2: Another nice day weather-wise. Headed north out of Weiser on US-95 and eventually met up with the Weiser River. Yes, more twists and turns and scenic views as the road closely follows the river. Eventually we cross a divide and pick up the Little Salmon River as it flows north toward Riggins, where it joins the mighty Salmon River. Together now, they flow north and eventually flow into the Snake. Dramatic country through here. But we're not through yet. At Grangeville we take a little shortcut on ID-13 to Kooskia, where we take US-12 and begin following the Clearwater and the Lochsa up and over the summit on Lolo Pass -- one of our most favorite drives in the USA. From there, it's downhill along Lolo Creek to the town of Lolo Montana. Just up the road in Missoula we pick up I-90 which follows the Clark Fork River until it disappears into the mountains and we cross the continental divide near Butte. It's all downhill from here. Near Three Forks Montana, three rivers... the Jefferson, the Madison, and the Gallatin (all named by Lewis and Clark) join to form the Missouri River. We trudged on (by this point in the afternoon, it's becoming a trudge) to Bozeman and found a camp for the night. Cold again... happy to have an electric plug close by. (528 miles/total 1000) 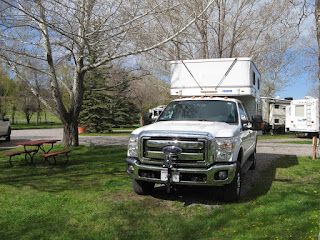 Day 3: Weather is an issue for us today. There's a large storm east of us that's predicted to cause trouble for travelers through Wyoming, South Dakota, and North Dakota. Heard predictions of up to 2 feet of snow for the mountains around Rapid City, but general havoc throughout the entire area. Hmmm. We decided to make a short drive from Bozeman to Billings today, where we got a motel room and will wait out the storm. Depending on how it develops and matures, from Billings we can either take I-90, as we planned, into South Dakota, or we could take I-94 into and through North Dakota. We'll wait and see. (143 miles/total 1143) 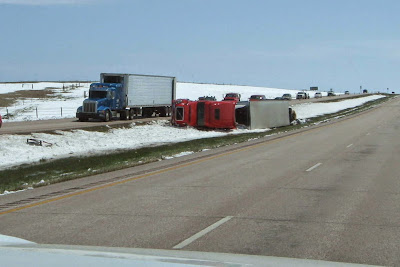 Day 4: Woke to sun. After checking the weather and road conditions decided to stay with our South Dakota plan. We were on I-90 all day long except for the US-212 cutoff through SE Montana. And a long one it was... almost 700 miles. We did see a lot of cars, trucks, and trailers in the ditch and in other states of disorder (on their tops, sides, etc) around Rapid City, but the road was in good condition... only wet in a few places. By this time the sun and warmer temps were working on the blanket of snow that covered the area. Not much to report through South Dakota. Truck was running good, miles were clicking by, and good conversation and companionship kept us alert. As we neared the end of the day I think we ran into the back of the storm system from yesterday. Dark clouds, high winds, and sniffles of rain... we threw out the anchor in Sioux Falls and did another night in a motel. (681 miles/total 1824) 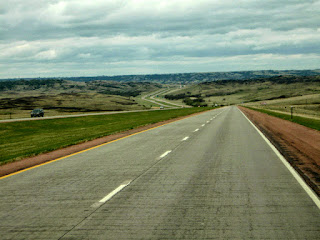 Day 5: May 12th. As long as the truck keeps on tickin', we'll be at our destination in Wisconsin this afternoon. Once again it was I-90 almost all the way. Thought about stopping at the Spam Museum again, but pushed that off for another time. Arrived at our Wisconsin homebase, "the farm", a little after 4pm. (445 miles/ total 2269)

The trip was fast... faster than we'd prefer to travel. But we have a bunch of things to get done in Wisconsin before heading toward Alaska. The thinking goes... the sooner we get there the sooner we'll be heading north. Having the early portion of our trip follow along so many rivers made it more enjoyable and certainly more interesting. For now, we're making progress on our to-do lists, letting our butts re-adapt to normal up and walking around life, visiting and helping family, and getting excited about the big summer trip.
By Thom Hoch at 5/18/2015 03:14:00 PM

Random thoughts while driving across Montana 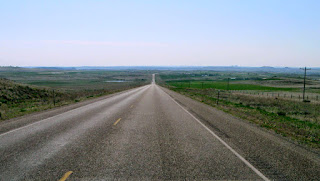 The drone of the truck motor, the whine of tires on the road as it treadmills out of sight under the windshield, lending a dimension of realness to the endless video we're driving into, through. Some say it's painfully boring... that it's justification for an 80 mile per hour speed limit in order to minimize the pain of long miles with nothing but flat land, dry sage, stubble grass, and, here and there, a few cattle.

But like most all places this one is loaded with a quietly fading "small" history if one takes the time to think about it. The pile of debris over there might be the ruins of a barn or a small cabin. Someone built it. Someone worked and struggled to give form to their plans. So much hope and passion wrapped up in each one. Yet so much uncertainty and danger at the same time. It may have represented the beginnings of a better life, of a self-reliant adequate existence, perhaps even riches if things worked out right... if their god looked favorably on their efforts. Or, as was often the case, utter failure was the result. They were so strong, so willing to take risks. Or, perhaps, they just had to do what they did because there was no alternative?

Some deny there's any history here at all, especially when compared to Europe or other places with "big" history. But to deny the past, or to deny it has any meaning is, I think, somewhat myopic. One may not like the smallness of this history, but it was important stuff to those who made it. And to the curious few who wonder about it.

Enough with this "preparation" stuff. I want to get on the road.

Tomorrow, Friday the 8th, is the day. We're going to wake up in a mostly-mothballed bushouse like anxious firemen ready for action, jump into carefully laid out clothes, grab the truck keys, and get out on the road. An early departure, right?

After many days of getting everything ready, we're finally going to be off on our big summer adventure. Some of you may know that we're going to drive the Alaska Highway (nee Alcan) all the way to Alaska. Since this is our first time in the 49th and (pay attention Texans...)  by far the largest state, we're planning this trip as a "survey course", an introduction to guide our plans for future follow-up visits. Are we excited?

But our trip is going to seem a little unconventional to some. Being in the Northwest, we're naturally positioned for the Alaska run. But alas, that would be too easy. Too "normal". We've decided to go to Wisconsin first.

For more frequent and timely updates on our progress, it might be best to follow us on Facebook (On the Road with Dar and Thom) or on Google+. This blog will be primarily used for more detailed but less frequent posts and interesting stories from our travels.
By Thom Hoch at 5/07/2015 05:31:00 PM
Newer Posts Older Posts Home
Subscribe to: Posts (Atom)