It's the circle of life on our little planet. We lost some of our family during the past year, but reinforcements (replacements?) weren't far behind. 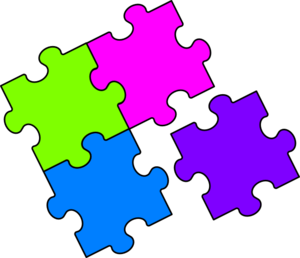 This week, the last two big Sabbatical II puzzle pieces fell into place. Who says clean living, wholesome foods, and a good attitude don't pay off? Actually, most of May has been a good month for us.

On Wednesday we officially became members of Timber Valley Escapee Co-op Park and now have our permanent lot, which will be our west coast home base and is where the bus-house will be based for the foreseeable future. We've been making an effort to get engaged with this small friendly community and are finding it very much to our liking. Our plan is to continue traveling and exploring about half the time and be in residence either here or back in Wisconsin the rest of the time. If that pattern continues to be agreeable, and if we like traveling and exploring in the small truck camper, we will probably replace the motorhome with a non-motorized trailer or fifth-wheel at some point. It just ain't right for a motorhome to sit. Trailers are for sitting. Motorhomes are for travel.

Then (and this is the big news of the week), earlier today... just a few hours ago, our third grandchild was brought into the world by Kaytlyn and JT, our Daughter-in-Law and Son up in the Seattle area. It was a long process (good things just take time) but we're happy to report that all involved are in good shape, albeit tired, and poised for a promising future. Since this is news hot off the wire, I'll have more to say, and a few pictures, with next weeks update a week from now. I can't overstate how happy we are about our new little grand-daughter.

We're at Andrea and Gage's place in the Portland area to spend some time with them and our two grandsons during the long holiday weekend. I suspect we'll be changing our plans for early next week and running up to Seattle for a few days to see the newborn.

May 17 - Pieces Falling into Place

We've made some real progress this week. Things are falling into place like puzzle pieces... with a satisfying click.

First, we sold our Northstar Arrow camper to a couple very nice people from Utah. We really hit it off with these two when they showed up early Sunday morning to check the camper out. It was one of those perfect fits, in a number of ways. The size and feature-set of this camper was what they were looking for, and their truck was set up perfectly for it. Once loaded, the camper looked right and reportedly handled like they, truck and camper, were made for each other. And we were happy it was going to new owners who clearly are going to take care of it. First puzzle piece... click.


Then on Thursday we drove a couple hours south to Medford to meet the installer of our new Four Wheel Camper. Because this camper is mounted somewhat differently than the Northstar (and most larger truck campers), there were a couple hours of work to prepare the truck. But with great weather and a friendly and knowledgeable installer, the time passed quickly. By a little after Noon, we were rolling down the road with our new Four Wheel Hawk. Second puzzle piece... click. 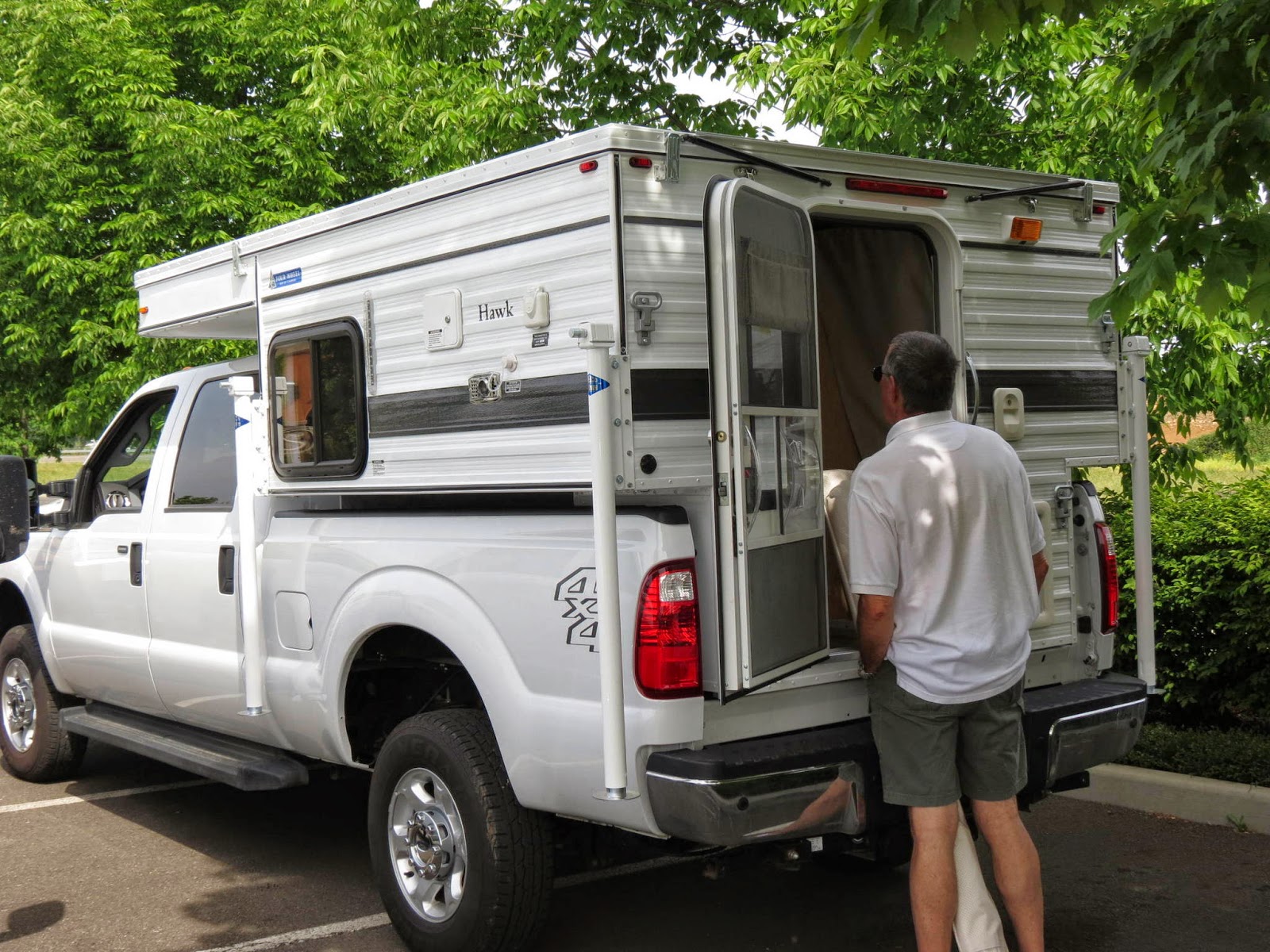 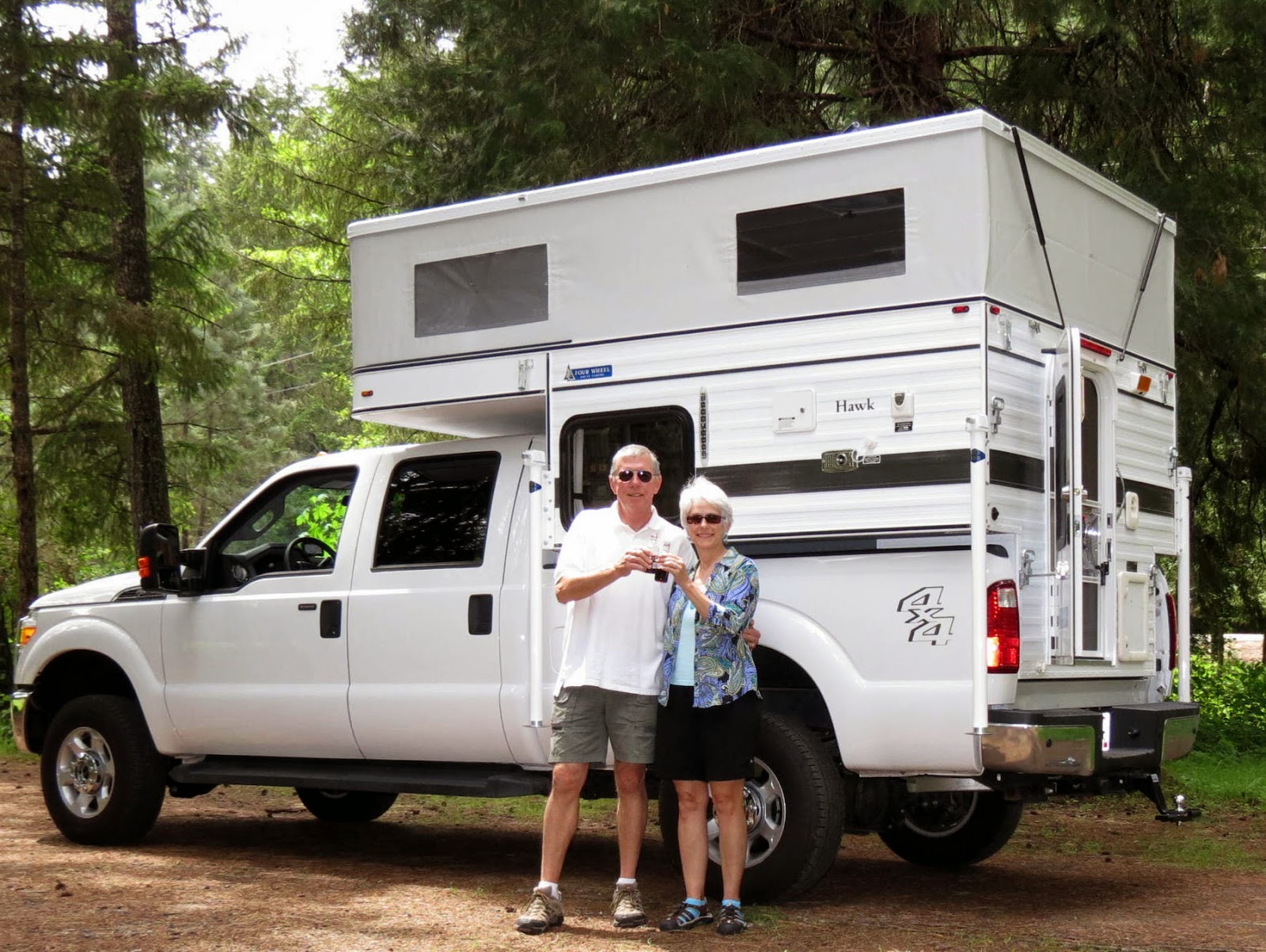 I'll have a lot more to say about the camper as time goes along.. but here are a couple comments from our drive back to Sutherlin that day. This camper, as built, weights a little over 1,300 pounds, so the truck doesn't seem to even know, or care, it's on-board. During the course of our return trip we passed a truck scale/ weigh station. In Oregon at least, when the scale is "closed", the scale itself still functions and provides a digital readout of your vehicles weight. So, onto the scale we go. Front axle = 4,450 lbs; rear axle = 4,450 lbs; total weight = 8,900 lbs. And that includes the two of us (yes... Dar is too light to even register on most scales, but I more than make up for her shortcoming), and a back seat full of stuff that's going to end up in the camper. The bottom line is we're well below the trucks 10,600 lbs GVWR and nicely balanced between fore and aft.

The difference between the drive down (with no camper) and the return trip (with camper) was minimal. The truck felt and handled nearly the same. Gas mileage on the way down was just shy of 16 mpg; on the way back, with camper and a light headwind, just shy of 15 mpg. Overall, I think we've possibly achieved our "nimble-ness" goal.

This week we also found out that the cogs and gears of the Timber Valley Membership Machine were turning and grinding, and progress was being made. It now looks like we're in the number 1 position on the active waiting list... and that we'll have a membership and lot in the next week or so. Third puzzle piece... almost click.

Life marches on here at Timber Valley in Sutherlin OR. This past weeks weather could be described as pretty much "normal Oregon"... a little of just about everything -- rain, drizzle, sun, fog, warm air, cool air... and all of it almost daily. If careful attention is paid to the sky, a cabin-fevered RVer might find a sun hole large enough to get out a bag-chair and soak up a few minutes of sunshine while soaking up half a bottle of IPA... but, then again, the sun hole probably won't last long enough for even that. Ah, Oregon.


In any event, I'm not going to bitch. Once firmly entrenched in the PNW lifestyle a person is acutely aware of the correlation between precipitation and the lush green environment. Rain is a necessary ingredient for there to be flowing streams and vibrant plant growth. We'll take all we can get. And besides, isn't this far better than the minus 30 degree wind chills we experienced during our January foray back to Wisconsin? Let it rain.

Unfortunately, with a much less than normal snow pack from this past winter, and even with recent rains factored in, the stage could be set for a big wildfire summer. More wait and see.

Shifting gears: on our progress toward a home base... we're slowly moving up on the waiting list here at Timber Valley and have our fingers crossed that we'll hit the jackpot in the next month or so. Snagging a membership before we head back to the Midwest for the summer would greatly simplify things for us. It's going to be close so we'll just wait and see how things flow.

There's also a good possibility that our Northstar truck camper will have a new owner before my next blog update a week from now. And we think we'll have some news about the new camper by that time too. Stay tuned kids, for more developments on Sabbatical II.

Just saw the weather forecast for next week. Oregonians have a learned distrust of any weather forecast, but if this one is close to accurate, it's going to be a very nice week.
By Thom Hoch at 5/10/2014 07:54:00 PM

Dar drove up to Camas last weekend (the 25th to the 29th of April) to spend some time with Andrea, Gage, and the kids. The main objective was to hit a local home and garden show with Andrea for some home-improvement and landscaping ideas. The secondary objective was to make some of the landscaping ideas reality. That's right... getting down in the dirt... digging... and hoeing... and planting. By the time she dragged herself back home to Sutherlin, she was tired and sore, and it was Tuesday.

I wasn't invited. Or, shall we say, I chose not to go? Either way, being apart for a few days can make you appreciate having your partner around. For the 4 or 5 days she was gone, I carried on pretty much as I would have if she was here. I even went out for some light exploring one day. But it just wasn't the same. Something was missing. Even though we're like oil and water, fight like cats and dogs [wink] all the time, being alone for days on end is just something I'm not used to.

For me, traveling and exploring is a much richer and more enjoyable experience when doing it with someone else. Especially someone who's in sync with this nomadic life and shares a passion for history and geography and the cultures of North America. Having to carry on alone... if she was out of the picture for some reason... would be a problem. Sure nice having you around Dar. Really, I've heard Brad Pitt ain't all he's cracked up to be and comes with more baggage than you might think.

Speaking of exploring... Wednesday we headed up to Crater Lake. The fastest way to this National Park, from Sutherlin, is to get on SR-138, the North Umpqua Trail, and take it all the way to the North Entrance. Only things is... this time of year the North Entrance is still closed, locked in by snow that has yet to be cleared -- won't be cleared until June most years. So a Spring traveler must take SR-230 around the west side of the Park to SR-62 which will take you to the West Entrance. The West Entrance stays open year'round. From our home base in Sutherlin it's nearly 140 miles.

This whole foray was really an excuse to get out of the house... an attempt to capitalize on a really nice sunny day, have lunch at their little cafeteria, sneak a few peeks of the Lake surrounded by snow and covered with a bright blue sky, take a few pics. You know... just soak up the day.

And that's exactly what we did.

On the way back we were reminded of the benefits of "linear travel" that we intend to do more of during Sabbatical II. We found a stunningly gorgeous NFS campground along the North Umpqua River where we stopped and had a snack. It was right on the banks of the quickly flowing river. Directly across from the campsite we were borrowing was another creek, full of Spring runoff, vigorously colliding with the North Umpqua. There was no one else in the campground. It was perfect. If we had our truck camper with us we would have been home for the night.

Instead, we packed up our little picnic and drove the hundred miles back to Sutherlin. 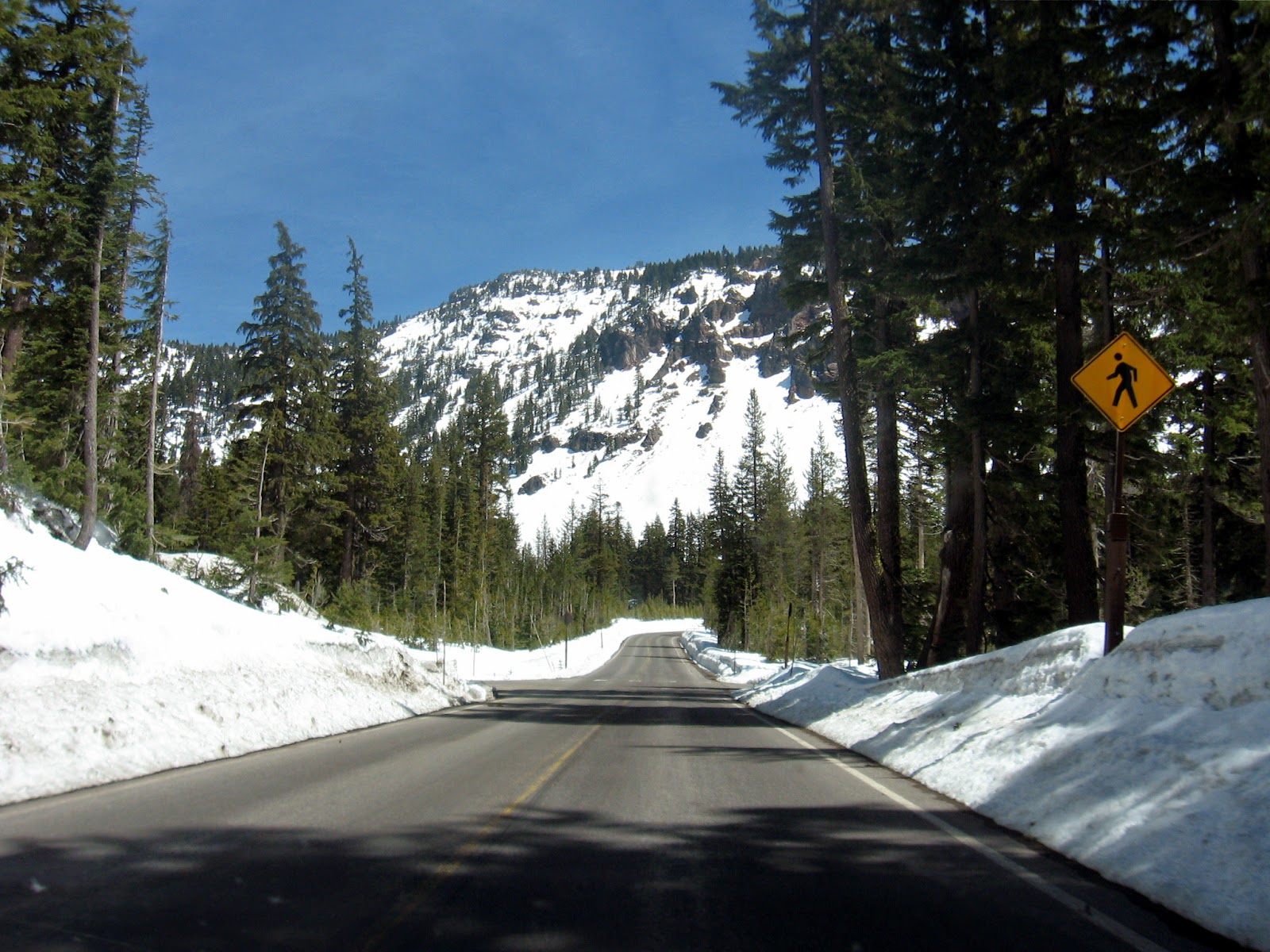 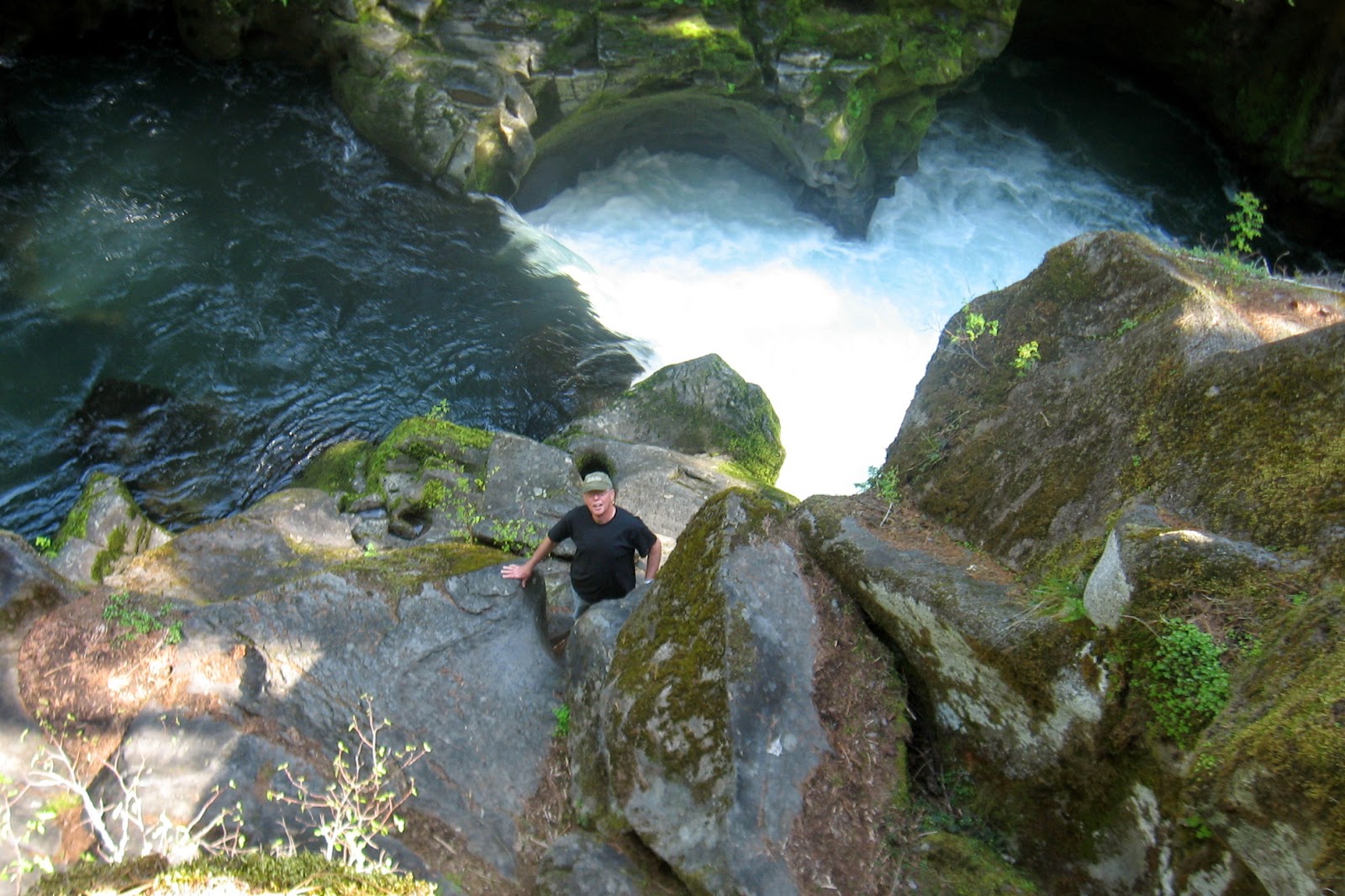