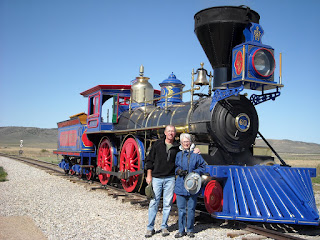 I love trains... railroads. Since my childhood I've been fascinated by the whole idea of two steel rails running over the ground and big locomotives pulling all kinds of things, almost effortlessly it seems, to wherever the steel rails went. I also love history. And when both of these things come together in one place, well, we've just got to go and explore.

A few years ago I read Steven Ambrose's book "Nothing Like it in the World"... the story of the building of the first transcontinental railroad. I devoured it, and still recount stories from it, often to people with blank stares on their faces, wondering why I'm telling them this. But it was magical to me... how a complicated, messy, unbelievably difficult project, full of personal greed, graft, outright theft, political intrigue, hidden motives and agendas... the logistical nightmares and impossible obstacles... the dreams and hopes of a growing nation...how people are motivated and marshaled to do the immense amount of work necessary... and how, in just a few short years it all got done. 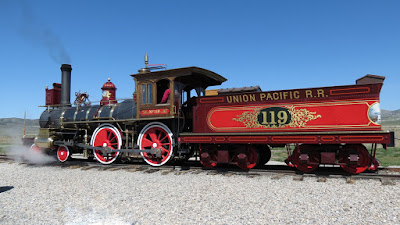 If you know the story, the Union Pacific Railroad started near Omaha and worked toward the west. The Central Pacific Railroad started in Sacramento and worked toward the east. And in 1869, May 10th to be precise, the two rail lines officially were joined at Promontory Summit... out in the middle of nowhere Utah. They laid 1,776 miles of iron rail, precisely 4 feet 8-1/2 inches apart the whole way. They crossed deserts, rivers, and mountains. They bored tunnels through solid granite. They built wooden trestles to span deep gullies. They moved immense amounts of rock and earth... cutting through hills here and filling in low areas there.

As we walked along the now abandoned original grade of the transcontinental railroad, hiked through large rocky "cuts" I marvel... no, I'm in awe at the accomplishment. This was not done with mechanized equipment... it was done with human and animal muscle, a few crude tools and implements, a little blasting powder...and that's all. They built 1,776 miles of track and never exceeded 1.7% grade (90 feet elevation change per mile), and only rarely exceeded 1.5%.  We had fun looking for, and finding, some of the original drill holes in the sides of the old rock cuts.

All the rails, the locomotives and train cars, and any other manufactured goods used by the Central Pacific on the west side of the project had to be shipped from the east coast... all the way around South America by ship. The Union Pacific, coming from the east, had to deal with irritated Indians, finding trees for wooden ties in Nebraska and Wyoming, heat in the summer, freezing cold in the winter. 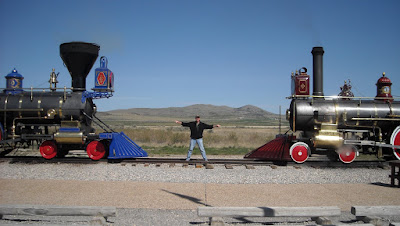 The project was, perhaps, comparable in scope and difficulty for it's day to our 1960's space program to put a man on the moon. Both were considered nearly impossible to accomplish. Both took incredible resolve and national determination to complete.

When they symbolically dropped those ceremonial spikes (there were 4 of them) in the pre-drilled holes in that last laurelwood tie, everything changed.  Prior to the joining of the rails, travel between the east coast and California was a long, expensive, and arduous journey by steamship, stage coach, or walking. It would take months to accomplish and 1 in 10 people didn't survive the trip... mostly due to disease.

But after the joining, we moved from a 3 mile per hour world to a 30 mile per hour world. The journey across the continent was now affordable for many more people. Instead of taking months, it would take 10 or fewer days in relative comfort.

And there was a darker side for Native Americans. The railroads simplified travel and increased the rate of westward settlement which displaced the Indians and increased the extermination of remaining buffalo herds, thus forcing American Indians to assimilate or move to reservations. It was the end of their way of life that had endured for many hundreds of years. But time and mankind moves forward and sometimes we take two steps forward and a step back. It's not always fair.

The Golden Spike National Historic Site maintains and preserves the site where the two lines joined, and a few miles of original grade produced by the two crews. Both the UP and CP were paid for each completed mile of grading, and paid more once the track was laid and the line was approved and ready for service. Because the grading crews worked further ahead of the track laying crews, sometimes as much as a couple hundred miles ahead; and because congress hadn't yet determined the point at which the joining would take place, the grading crews actually over-shot each other... by over 200 miles. That's why, through here, you can find two distinct grades. Once congress determined that Promontory Summit would be the meeting place, all new grading stopped.

The Park Service also maintains and operates replicas of the two steam locomotives that were part of the Golden Spike ceremony in 1869. The originals were scraped about the turn of the century and no plans or blueprints could be found. So the two replicas were built by O'Connor Engineering Labs in Costa Mesa, CA. from photographs and an 1870's vintage locomotive design handbook.

OK, all you history and railroad buffs out there... here's the thing you really must see. Every day from May through October, the Park Service runs both locomotives out of their protective shed, runs them up and down the track, and then parks them just as the originals were parked on May 10, 1869 for the driving of the Golden Spike. I'm usually not too thrilled with reproductions of historic things... but when you hear the steam whistles and chugging sounds, see the smoke and steam and fly ash, and smell the burning wood and coal... something stirred inside me. You forget they are reproductions. These two marvelous pieces of historic engineering really added to the quality of our visit. And the two Park Service employees who operate the locomotives are in period dress, look and act the part, are knowledgeable and enjoyable to talk with about this piece of history. 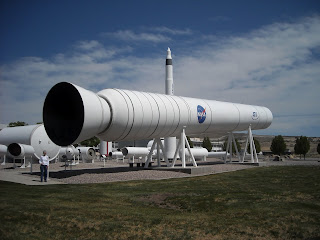 Running right along the original transcontinental railroad grade, and just outside the Golden Spike National Historic Site is a spread-out complex of modern office and industrial buildings we had to investigate after leaving the Golden Spike National Historic Site. This is a rocket development facility of the ATK Thiokol Company -- the folks who successfully developed solid fuel rockets back in the 50s and 60s.  They're also the company who built the solid rocket boosters for the now defunct Space Shuttle System. Sorry, no tours at rocket plants... but they did have a fine outdoor display of all their wares... including a full size Shuttle booster. It turned into a good stop... and unexpected bonus at the end of the day.
2012 Texas to Oregon Utah