Apr 30 - The Biggest Hole in the World 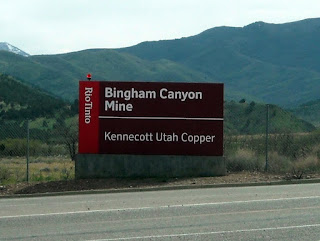 At times it seems that we've got a fascination with holes in the ground. The Grand Canyon, Palo Duro Canyon, Hells Canyon, and, more recently, The Goosenecks are just a few of the larger ones we've visited. The common thing about all of them has been that they were created by nature. Mankind is a distant second to nature in the ability to excavate (erode) earthen material and move it from one place to another.

But when we're camped so close to a notable example of man's work in this category, intrepid explorers really should make an attempt to see for themselves just what people can do. Well, mankind's premier work, in this regard, is the Bingham Canyon Mine... about a 30 minute drive from downtown Salt Lake City. The statistics are staggering by themselves... a hole 3/4 of a mile deep, 2-1/2 miles wide. But when you actually see the place it's hard to comprehend... the scale of the it makes comparisons futile. This is the largest man-made excavation in the history of the world, one of only a handful of man-made things visible from outer space.

The mine was opened in 1906 and has been operating for most of the time since. It's copper ore is low-grade... a ton of ore contains about 10 pounds of copper, but enough to make it profitable to mine. Operated by Kennecott Utah Copper, a subsidiary of Rio Tinto Ltd., the company employs more than 2,000 people in it's round the clock operation these days. Every year they produce 275,000 tons of copper, and lesser amounts of gold, silver, and molybdenum.

The drive to the visitor center is a 2,000 foot climb from the valley below. There's a museum, theater, and viewing platform perched on the side of the pit. They charge $5 per car to come in, but the proceeds go to charity.

I'll always remember looking into the mine and hearing, amid the crushing and loading and crunching of rocky material, railroad locomotives. What? That's right... railroad locomotives, straining under full load... the loud low rumble and whine of big motors. But it wasn't locomotives... it was huge mine trucks that lug up to 325 ton of material out of the pit in each load, working their way slowly (it seemed) uphill. They sound like locomotives because they are a lot like locomotives... huge diesel motors driving huge generators making huge amounts of electric power for the huge electric motors that turn the huge wheels. What's that I said about scale??

It's a beehive of activity with dozens of those big haul trucks going here and there, huge shovels loading the trucks, big drills boring blasting holes, an in-pit crusher busting up the bigger chunks into smaller chunks, support vehicles running here and there... the whole operation is controlled from a central traffic control center, like a busy airport.

I wonder if they're going to fill the hole back in when their through? 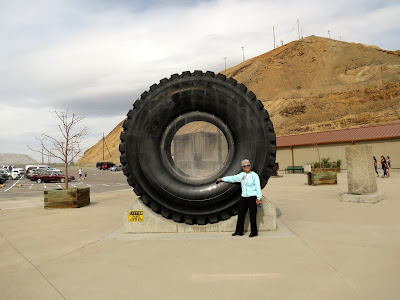 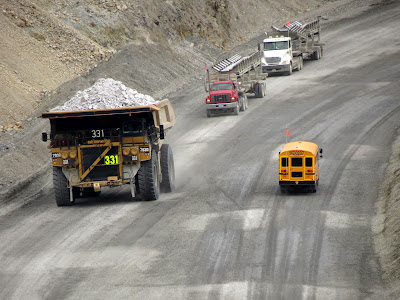 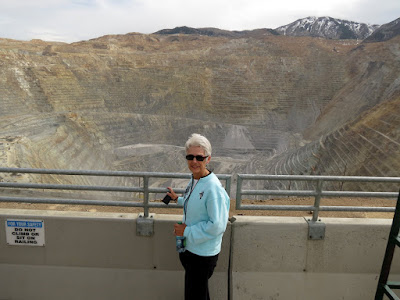 2012 Texas to Oregon Must See Utah